What was I doing yesterday ? Where were you ? The headline says it all to our pompous know-it-all fans across the Atlantic (and especially the ones who live here in America). If not for the lucky bounce off the post, Altidore's shot would have sunk the mighty England. 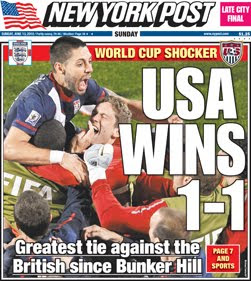 After going down a goal within 4 minutes, the Americans battled back to tie it on Clint Dempsey's gutsy strike which turned round England Captain Steven Gerrard like a balarina.
Lampard - nil
Rooney - nil
Lennon - nil
"Don't Tread On Us" ... not then ... not now. GO USA !
Posted by Chuck's Used Cards at 8:50 AM