Who Needs Defense ... Not Argentina

As anyone who follows the "beautiful game" knows, that how a team plays is as important as winning. The Brazilians have made an art of this idea. The addage "the best defense is a good offense" has been Argentina's rallying cry at this World Cup tournament. 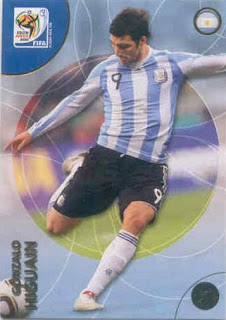 The critisism of the great Diego Maradona as coach of the blue and whites, was put to rest as Gonzalo Higuain open the flood gates of scoring 3 goals against South Korea. Higuain, who plays his club ball at Real Madrid, has been overshadowed by Argentina's other strikers - Carlos Tevez and Lionel Messi - tallied the first hattrick of 2010 South Africa.
I said it before, and I am sticking with it, that this Cup will be won by a South American side. Uruguay's Diego Forlan (who I blogged about before) began the multi-goal perfomances with two against the host South Africa.
The sympathetic support may be there for all the African teams, but the reality is that they are their worst enemy. I will be surprised if one of the 6 African squads makes the quarter-finals.
Panini America has been good enough to heed my complaints and send me samples of their 2010 World Cup products. I will be reviewing them shortly, not only the traditional stickers but also the Panini Adrenalyn XL cards (example of Higuain above).
World Cup fact: The very first hattrick in World Cup history was scored by American Bert Patenaude (Fall River Marksmen) against Paraguay in 1930.
I managed to complete three sticker squads in the Panini virtual album despite my late start. Heavy trading yesterday resulted in finishing USA, Mexico and England - therefore obtaining the Federation badge for each.
Posted by Chuck's Used Cards at 7:48 AM