Thanks to Cardboard Junkie - I am addicted to spending my non-game watching hours collecting, and swapping virtual Panini World Cup stickers. 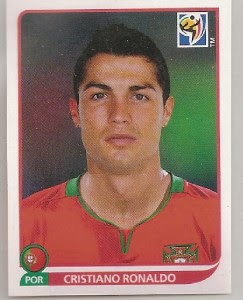 Since Panini America has been absolute crap in getting the REAL things into the hands of collectors - this Panini virtual site will have to do.

I tried to join dayf 's swap group but it was already full. So I created a group:

I will swap any of my stickers at this point. If I find a team that I think I can complete, I might reserve a few.

Incidently, except for Germany's goal glut - with 4 different strikers scoring goals - almost all the firepower has come from the midfield. 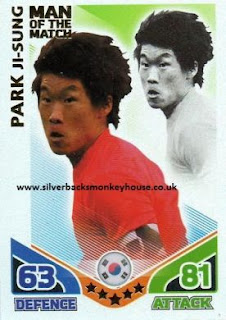 That means so far, no goals from Rooney, no Van Perse, no Henry, no Messi, no Altidore. Man. United's Korean midfielder (above) - Park has scored one of the best so far.

So far no player has more than one goal.

I will be updating the contest tallies after every team had played at least one game.
Posted by Chuck's Used Cards at 7:48 AM

Tried to join the virtual sticker group, but it says that the id and the password don't match. Am I missing something?