The hobby of card collecting is cumilative. That is - as more people are involved, more knowledge is passed from the center to the outer circle. A subjective look at recent sales of soccer cards and world wide soccer issues, reveal the massive increase in interest. 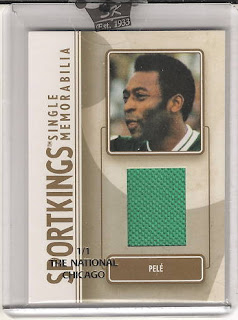 While grading of soccer cards is still in its infancy, it has just exposed the tip of the iceberg. The biggest hurdle is the lack of knowledge from the grading companies.

In my curiosity I peaked to see what they had listed under soccer. Well, well - someone actually had a PELE' Master List ! But wait ... there were only 20 to 25 cards listed ?

We ARE talking about PELE' - the undisputed KING of Soccer ... Football, Futebol, Veotbal, Calcio, Futbol ... everywhere in the world. So how can there only be a couple of dozen cards from a player that appeared on every continent, played in 4 World Cups and had a career over 2 decades ???

My own personal Master List of PELE' cards is over 200 cards - not including sets specifically dedicated to the world's most famous athlete. PSA's list also included a rash of mislabled cards.

The other well know card grading company - SGC (Sportcard Guarantee) - has dabbled into soccer card identification, but still have allowed a few errors to hit the market with their labels.

I have begun to compile a Master List for 3 of the most popular soccer players. I hope to have these available on CD ROM before summer.

Meanwhile, I hope PSA gets to know their goalpost from their helmet.
Posted by Chuck's Used Cards at 8:05 PM

that's awesome! do you have plans to make that available to, um... well, me?

I've started to make a list of Edwin van der Sar, just because I can't find one anywhere.....

Cap - rather than attempt this huge complilation of every soccer card ever made, I hope to produce smaller volumes of completed checklists.

I've been jonesin' for a Pele autograph card for the better part of two decades, but I only ever see the Sports King one and they go for BIG money.

BTW, I just found your blog and love it. I am reading reading reading all your back posts. I've also added you to my blogroll at www.fightstrap.com which is my hockey card blog. Check it out if you ever get a spare moment

I'd love to contribute to your Pele Card Master List. Can you make public the ones that you do track? I've thought it would be great to put it up online and have the community contribute.

Very colorful set measuring 4 1/4″ x 1 3/4″
Printed in Brazil and backs have a paper money design with a lot of writing on them. I can send pictures if your interested.

Thanks everyone for the encouraging words.

I will have more info on my Master Lists soon.

Dino - by all means send me sample photos of the soccer bucks with PELE.