Anyone who follows the world's most popular sport is already aware that the next World Cup will be played in South Africa this summer. The 2010 FIFA tournament will be unique in many ways with the continent hosting it's first World Cup.
The commonality of cigarette cards from first Europe, then South America is also the progression of soccer itself. With the advent of the North American Soccer League (NASL) the U.S. added themselves to the list of countries that produce soccer cards.
But the European influence had reached Africa even before the Second World War. Proof of this comes with the 1939 African Tobacco Manufactorers Ltd. set. The series titled "The World of Sport" really does include personalities known globally for their athletic achievments. 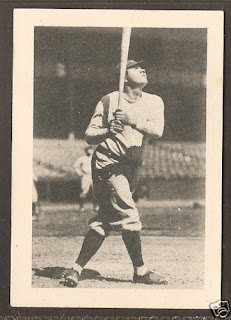 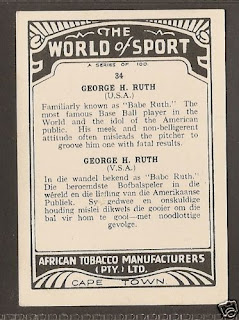 The 100 card set includes mostly British and American athletes. However, there are Australian, German and Italians as well. The greater part of the cards feature boxing and track & field. 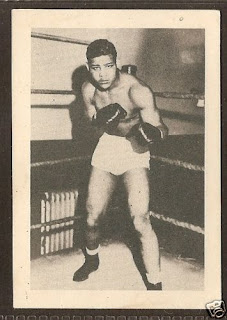 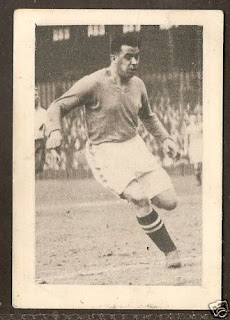 What makes this group special is their rarity and the inclusion if idolized sporting icons. The most sought after card - the baseball player Babe Ruth. Two African-Americans follow closely in Joe Louis and Jesse Owens who made their mark on the world as minorities.
One of my favorite cards is of course - William Ralph "Dixie" Dean - the great Everton F.C. and England soccer star. It is said he was given the nickname "Dixie" because his wavy hair and dark toned skin was a reminder of persons from the Southern United States. 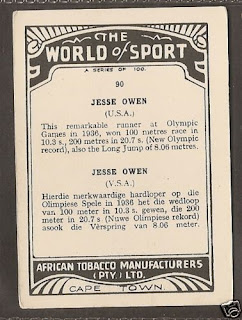 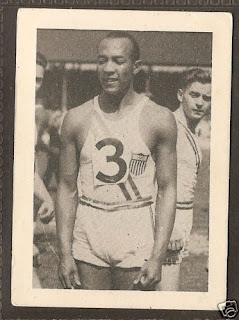 Not to be lost in the irony, that the cards are printed in Cape Town, South Africa and written bi-lingually in English and Dutch (Boer). The colonization by Dutch and German settlers is what led to the practice of Apartied - the separation of the people by race.
A great set using modern photos of the day. Every sport collector should own at least one card from this set.
Posted by Chuck's Used Cards at 12:13 PM