Are You A Tough Guy ?

Remember school days when it seemed important to be a tough guy ? The thing about trading cards is that if your sport requires it, a tough guy picture is a hit on the playground. 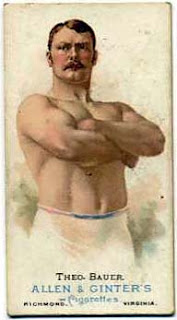 So who looks ike a tough guy ? Wrestler Theo Bauer (above) looks quite the intimidater a hundred years before WWF guys were posing as such. This 1887 Allen & Ginter is a true sample of artwork. 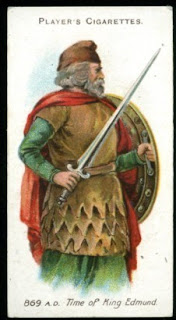 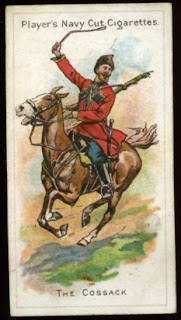 1909 Player's Cigarettes Arms & Armor and the 1905 Player's Riders of The World are two sets that displayed superior illustration of men ready for battle. Three sword welding mad-men were probably ancient all-stars.
What's different about the card below ? Could it be the fact that the offensive skater is wearing a helmet and face cage ? Meanwhile, the goalie - Lorne Worsley - has no mask.
Lorne, better known as "Gump" was one of the last NHL goalkeepers to don the face mask. 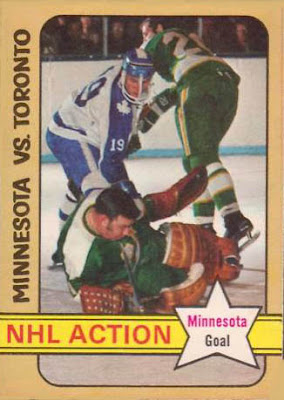 Worsley was a part of the Montreal Canadiens 1960's dynasty. He experienced a nervous breakdown and suffered from a fear of flying.  He was lured out of retirement for the expansion Minnesota North Stars. This great moment of battle was only available in the 1972-73 O-Pee-Chee hockey set.
Posted by Chuck's Used Cards at 3:46 PM

And the Gumper! His normal card from that year kills. So much pomade he didn't need a helmet.

Are you collecting 1887 Champions? It is one of my fav sets ever. I dont have that card if ya ever wanna part with it. I really love that set. I don't expect to see them, when I saw the thumbnail on my blogroll i did a double take. GREAT STUFF HERE!

Yes, the Topps cards were quite deprived that year, though the Topps version of the '72-73 Keith Magnusson card was actually better than its OPC counterpart:

Pat, have you ever read Worsley's autobiography, "They Call Me Gump" ?

I have never seen that Magnusson card until now. MUST HAVE!

I'll track down Gump's autobiography; my uncle loved him as a player and I know he'd enjoy reading it, just like me.

I have a nice Gump auto that I'll post one of these days.

Gump's book was one of my favorites growing up. It is long out of print, so you'll have to hunt around for a copy. Not impossible to find--I somehow ended up with two. I bought one as soon as I could, and then an autographed copy a few years later.

Chuck, not to $PAM your blog, but here is a blog post I wrote about Gump's book:

OK, I'll keep all the commenting to my own blog the rest of the night :)

any information that carries interest is not spam.

I'll be on the search for Gump's biography - from the NHL archives I found him fascinating !

I love all the old stuff. COMING SOON my blog on a turn of the century game which has cards existing of all 22 player !