A Card To Be Made Later ... and Black History Month

I really hate falling behind. I have made the trades, sent and recieved - yet I have not got around to scanning the wonderful cards I now have in my collection. I've also fallen behind in exhibiting some of the cards that readers have been wanting to see.
So .... I've finally finished two of the cards for fellow bloggers - Shane over at SHOEBOX LEGENDS - is a die-heart Hartford Whalers fans.
I love retro-historical cards, players and teams. Therefore his prize is a Ron Francis all-star card in the design of 1971-72 O-Pee-Chee hockey. (ONE OF MY FAVS) 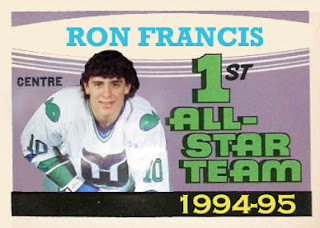 Subsequent to my posts on the never-made fantasy cards of 1979 Topps NASL soccer - there was a hue and cry for Chicago's representation. Therefore I created this card for the former NASL Champions - CHICAGO STING  - in the style of the 1981 Donruss baseball set.
Karl-Heinz Granitza was the scoring wizard for the Soccer Bowl '81 winners. I hope  this satisfies Sal over at PUCK JUNK and my fellow traveller at JOHNGY'S BEAT. 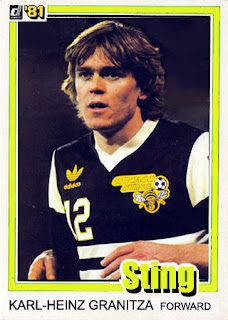 BLACK HISTORY MONTH:
It often amazes me that when I travel abroad, foreign peoples' awareness to the prejudices that kept black American athletes from particpating in major sports leagues.
This collusion was rampant among many team owners - notably Washington Redskins' owner George Preston Marshall - who conceeded to finally sign a black player through pressures of the Kennedy Administration.
The player he eventually signed was Bobby Mitchell. You can read more about the NFL, Marshall, Mitchell and Black football players here. 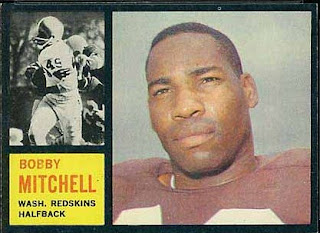 Wow that Francis card is top notch! What an awesome design!

I would seriously but a few of those if I ran across them. Thanks for creating that!!!

I am old enough to remember the Chicago Sting, but too young to have gone to any of their games. Still very cool to see a custom Sting card.