The world is hungry for pre-war soccer cards. The USA is playing catch-up and paying to do so. For most of the card crazy 1980's and 1990's baseball cards have been the top valued collectible on cardboard. 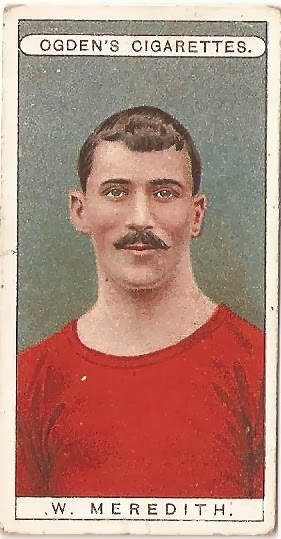 Recent auction results have shown that pre-war cigarette baseball cards have returned an unbelievable investment - better than any stock market or banking options.

To the hobby purest, this might seem as blasphemy, but the dollar (or Euro) drives many markets.  So, whether we like it or not, these financial pressures do effect collectors and what they can afford.

Most recently, hobbyist have been searching for low cost, high return items for their collections. Enter - soccer cards. Unlike American tobacco issues, which for the most part were produced for a larger population, many European and British card sets were limited to local purchasers. But now, the world's fanfare with the Barcelonas, Arsenals, Bayerns and Chelseas have driven up the demand for these collectibles.

Over the last decade, only a handful of clubs can say they have the world following (and success) of Manchester United.

While there are many rarer card sets from the first decade of the 20th century, it is equal in many ways in comparison with the 1909 baseball set know as T-206.  Separating the variations and manipulated hype (Wagner card), the top valued player in the baseball set might be Ty Cobb.

Cobb led his Detroit Tigers to the pennant and in the midst of 9 consecutive batting titles.  Meanwhile, Billy Meredith led Manchester United to the first of its record setting 21 league championships in the 1907-08 season.  He led them to win the FA Cup a year later.

The 1908 Ogden's Cigarette Famous Footballers is only a 50 card set. Most British price guides value all the cards in the set evenly, with Meredith bringing the same $ 7.00 as the rest in the set.

However, recent auction sales have shown that demand for the "Welsh Wizard" have quadrupled and that some dealers have even been commanding $ 50 dollars or more for this card.

I've added this card to my personal collection and at the current prices will probably grab another few if I can.


WHAT CARDS DO YOU THINK ARE UNDER VALUED ?