Back in Black Hawks

For about the last 10 years of opening hockey packs, there was little to look forward to when finding a Chicago Blackhawks card. But this season's explosion of old time hockey success has ice heads scrambling for the young guns of the windy city.

As anyone who trades with me knows, I am a collector of the original six franchises and it is refreshing to finally get some interesting players from Chicago.

While I am desperately trying to finish off my 1971-72 topps hockey set, I noticed that I was in great shortage of Black Hawks. Seven of the 25 cards I needed were Hawks. As I found out from Sal at PUCK JUNK, the team has refered to as one name Blackhawks since 1986.

I've recently cut that number by acquiring the big two from Chicago's heyday of the 1970's - Stan Mikita and Bobby Hull. I was happily able to get the pair of Hall of Famers for less than $6 bucks. 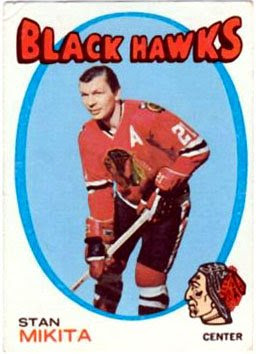 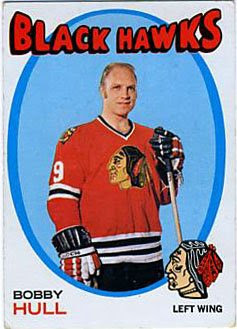 I will soon be moving on and opening new material to chase the next wave of Blackhawks stars. As a further reminder, the Hawks will be playing old rivals Detroit Red Wings on New Year's Day - OUTSIDE at Wrigley Field in the WINTER CLASSIC. You can catch a time lapse video of them setting it up at NHL.com.
Posted by Chuck's Used Cards at 7:26 AM