In this modern day of technology it does not take long to get a response to anything you put on the internet. My blog about hockey season drew out the touques and sticks from north to south - east to west.

One holiday give-away yielded a 500 + count box of 1991-92 Upper Deck hockey. A long forgotten set as UD spewed set after set of white border goodness in these years. This particular set was made in the 75th anniversary year of the NHL.

Nothing was held back in this box as it contained a zamboni load of Hall of Famers (both current and future). A super subset of Canada Cup international players had a handful of players from Canada, Czechoslovakia (that dates it) and Sweden. Included were two and three cards of each of Patrick Roy, Ray Bourque, Joe Sakic and Steve Yzerman. There were tons of rookies including John LeClair.

The photography is still exceptional - before all the beach and golfing poses yet to come in UD history. This is pure hockey. Look at the eyes of Patrick Roy !

To my suprise, also stuffed into this box was about 20 cards from 1999-2000 SPx set. It contained a few big names like Forsberg, Kouvu and Lidstrom. It also had two of the top rookies from that set - Robert Esche and Steve Kariya. This is an shiney set that can really exhibit hockey action poses. I really like the look of the original six teams in this modern set. 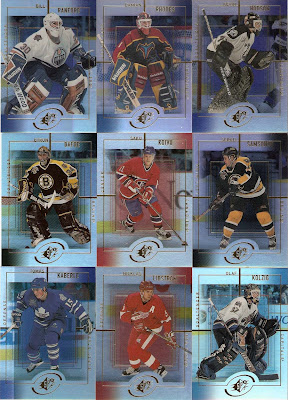 I am certainly enjoying the "giving" aspect of the holidays and card collecting. In that spirit, if someone needs cards from the 1991-92 UD set, let me know - I can fill your needs with the extras.

Great blog, the 1991-92 Upper Deck set has always been one of my favorites.