With all due respect to the original O-Pee-Chee cards (dating back to the 1930's) there were others. Canada's O-Pee-Chee brought us Topps style baseball cards, the odd non-sport set - and of course great hockey stars. 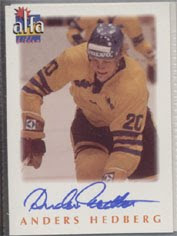 But there were cards being produced by ALFA bilder in Scandanavia - in particular - SWEDEN as far back as 1949. One of the first sets that included limited autograph cards came in the form of the 1997-98 Alfa bilder card set. 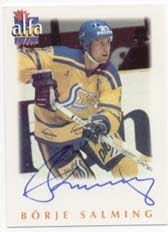 The multi-sport consisted of 90 cards was limited to only 2000 sets. A very appealing yet simple design showcased the best Swedish athletes in Soccer, Hockey, Tennis, Track & Field, and lesser known bunch of skiers, handball players and even a golfer. The LPGA star Annika Sorenstam rookie card appears here. 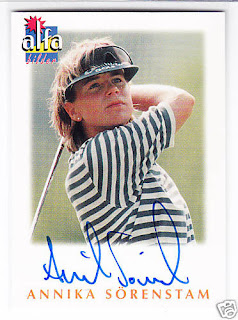 The sleek white borders were offset nicely by the blue autograph on the bottom of each card. For the most part, the Swedes are commended for their penmanship as to a tee all are very legible. The set has Swedish star athletes from as early as the 1958 World Cup soccer team (2nd place) to the players who won the bronze (3rd place) at the games when America hosted the World Cup in 1994.

However, the bulk of the cards have a 1970's feel and feature mostly heroes from that era. This includes the tennis greats Bjorn Borg, Mats Wilander and Stefan Edberg. From the 1970's comes Bjorn Nordqvist who starred in the 1970 World Cup and later played for the Minnesota Kicks of the NASL. 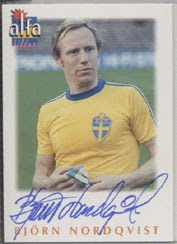 But for fans of international sports, its the soccer and hockey players that hold the value in the group. The hockey stars include not only Swedish greats but two early 1970's imports to the NHL - Bjore Salming (Toronto Maple Leafs) and Anders Hedberg (New York Rangers). 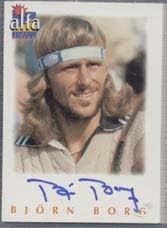 Although seemingly abundant at 2000 copies, most of these were snapped up in Sweden with probably only 40 or 50 singles making it to the American market in the past decade. Shrewd investors bought up a bulk of the Sorenstam card and have been selling them off on ebay.

While not an impossible set to complete, it is a task to find them. A plus for these are the autographs are hard-signed on the card.