Catching up - The World's Fastest Men

We've started our renewed columns with the invisible man. So, it is only fitting to follow up with the next best thing to not being seen - not being caught.


My pechant for Olympic heroes - especially the amateur era - is chronicled in these pages. What I can not get enough of is the massive set of GREILING Cigarette sets that were made in the 1920's. 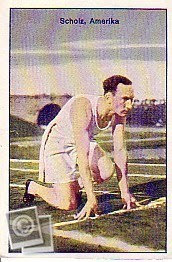 Of all the 1000 card sets, the 1928 Greiling Cigarettes has to be my favorite. These color images are a testament to early German photography. The first of these is Jackson Scholz - aka "The New York Thunderbolt" winner of Gold medals in 1920 and 1924. After his athletic career he gained famed as a writer - go figure. He appears twice in the set. 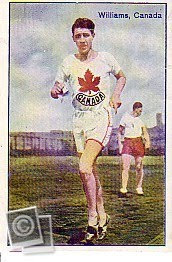 Just when the Americans thought they had the 100 meter monopoly which they dominated from 1912 to 1924, along came Percy Williams - a Canadian. He was no fluke and won 19 of the 21 challenge races the to which he was invited by the Americans. Sadly, Williams took his own life. Pity, as he was an insurance agent. 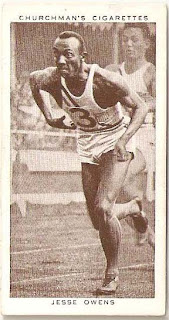 Nothing says super like the name Jesse Owens. His appearance on this 1938 Churchman's Cigarettes card - Kings of Speed - is humble unlike his records.
Every American sprinter after Owens was compared to him. While Owens chose to cash in and opt out of amateur status. Racial tension and the illusion of riches plagued his career. He later admitted that he was treated with more respect in Nazi Germany than in his own country. 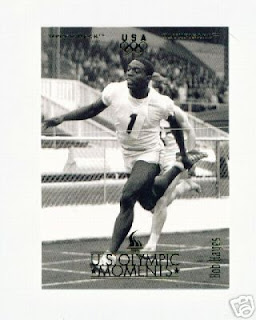 One such former American (1996 Olympic card) had an opposite post-Olympic career. Bob Hayes became a pro football player in the NFL. He stayed long enough to become part of America's Team - the 1970's Dallas Cowboys. Unfortunately, he turned to drugs and only recovered near the end of his life.
Jamaican Usain Bolt carries the baton of "fastest man" after sprinters from the UK and Canada held it through the 1980's and 1990's. He is full of bravado and and ego only to match his speed. How will he handle Olympic fame ?
Only time will tell ... at least for 100 meters. 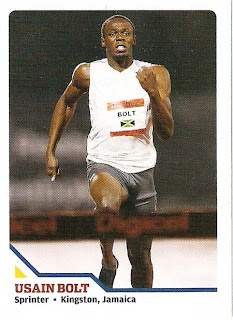