WAYNE GRETZKY showed the world how to play hockey. On October 15, 1989 - the Los Angeles Kings' center scored one and assisted on two goals against his former team - the Edmonton Oilers. He broke the 20 year record held by Gordie Howe. Howe surpassed the legenday Maurice "Rocket" Richard in 1960 as the NHL's all-time point leader. 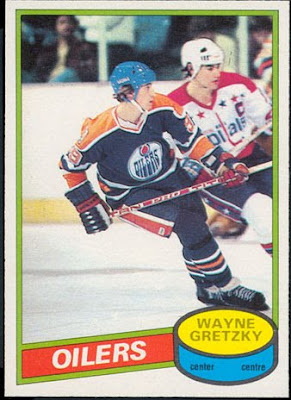 In the cardboard universe, very few have graced the hobby on as many cards as "The Great One" - Wayne Gretzky. 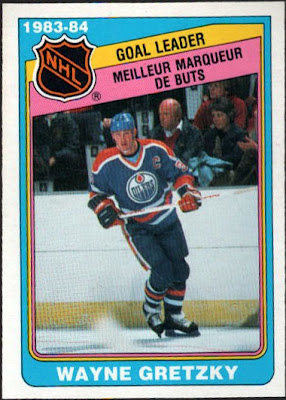 One reason Gretzky appeared on so many cards was that he was consistantly in the scoring leaders, records and awards featured in the sets (see above). Combine this with the glut of card manufactorers in the 1990's and the appetite of duel marketing (of Topps and O-Pee-Chee) for Canada and US - you have a landmark achivement which may never be surpassed.
To this date, Wayne appears on over 2,000 different cards ! 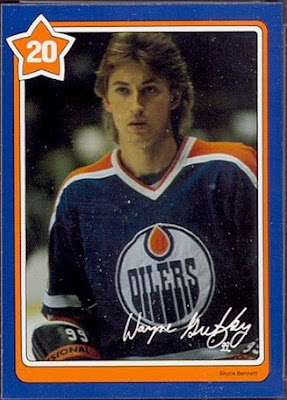 Gretzky was a marketing dream for food, toy and other products. A close look at his scoring contemporaries - Mike Bossy, Marcel Dionne and Mario Lemeiuex - were still distant runners up to his record feats. He changed the landscape of the NHL in America when he joined the Los Angeles Kings. 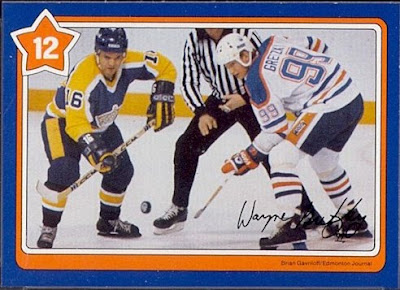 The examples of the 1982-83 Neilson's candy bars (above) were just one of the many regional issues that featured Wayne. The cards can be found every so often for $5 to 10 dollars. However, mint samples are rarer and a complete set is not easliy acquired - fetching just shy of $200.
If anyone has interest in sports cards, they should have at least one Wayne Gretzky in their collection. They are easy to find and most are very affordable.
Posted by Chuck's Used Cards at 4:50 AM

Great, now I really feel old. I remember when that happened and watching the highlights before school. I can't believe that was 20 years ago.

Those Nielson cards are cool, I've never seen them before.

the card on the top of the page with the caps player behind him. what card is this and what value if any does it hold?
thanks