There are many things that I liked about the football cards of the 1970's. Having said that - it was a time of change that was reflected in Topps, the dominating factor in cards from this era.

Nothing was brighter than football players in California (except the Brady Bunches back yard). If you look at the cards of the Rams, Raiders, Chargers and 49ers from the early 70's - the grass was greener and the sky was bluer.

If you wanted to be cool, you could pose like Jack Snow - with white shoes in mid-air. THAT was the way to be immortalized on a trading card ! 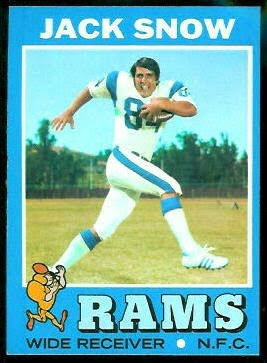 On the other hand, nothing exposed the bad side of 1970's cards than the advent of air-brushing.
This Coy Bacon card is so obliterated by retouching, he is almost non-existant. Ironically, Bacon was originally a Los Angeles Ram when the photo was taken - but something indistinguishable after his Topps-otomy. 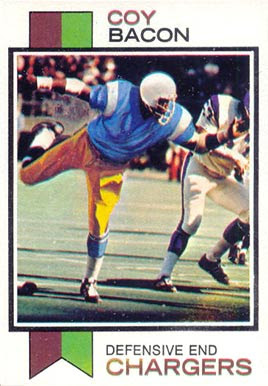 The suburban expansion was recorded on the practice fields facilities - especially on many of the Redskins cards (photographed in Maryland). Never have so many houses appeared in cardboard - as on Dave Robinson's - since the T69 Historic Homes tobacco set. 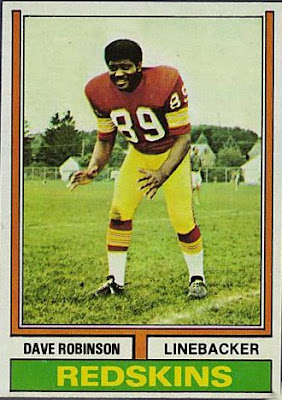 Willie make it, Buddy don't:
Sometimes the cardboard captures great moments. If this 1973 Jim O'Brien is not the actual field goal that won Super Bowl V over the Cowboys, then it's a great recreation. (except that N.Y. Jets are the opponent) 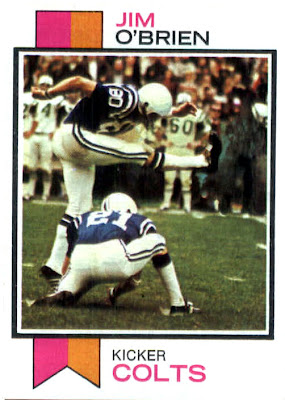 ... and then there is this attempt, a close 2nd to Garo Yempremian's failed pass in Super Bowl VII. There is no way this one went between the posts. 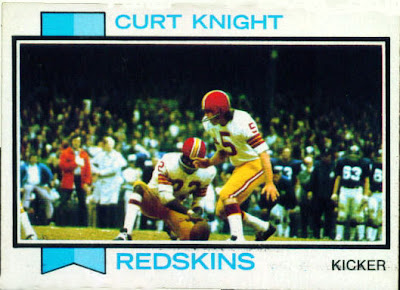 Right foot, Wrong field:
If Topps air-brushed the soccer ball out of Chris Farasopoulos' card - I would not be surprised. He looks like my friends on a Sunday pick-up soccer game. 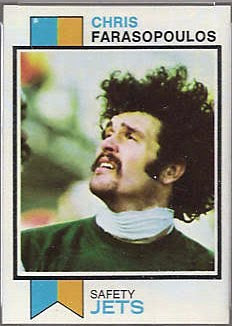 ... and Roy Gerela was doing double duty - as he turned around seconds after this photo to pose kicking a soccer ball at the goals behind him. 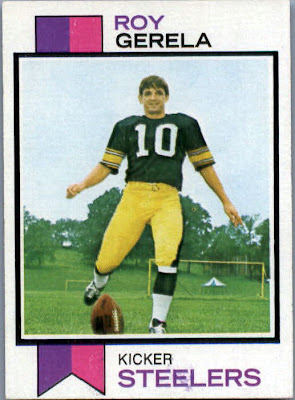 The invisible ink well:
Poor Don McCauley was exposed to the sprinklers (to his right) which washed away not only the football, but the quarterback who handed it to him. This one really cannot be blamed on Topps. The Baltimore Colts would vanish the same way in another decade. 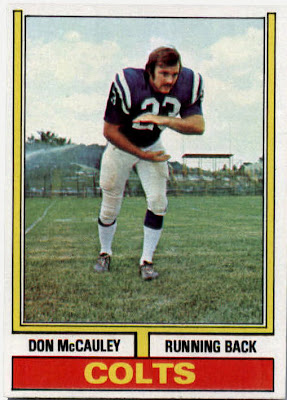 Who Ya Gonna Call ?:
The Ghostbusters may have been the ones to call for the mystery above. But it is usually the quarterbacks who were depicted using phones on there cards. so what is Carl Eller doing ? Dialing for assistance ? Ordering a pizza ? Moonlighting as an AT&T operator ? 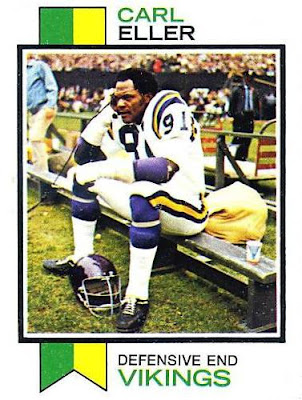 Hike it to Spike (please):
The United Way could do nothing to help poor Spike Jones. Not only was he stuck with the name of a famous nightclub performer, but he had the job of the thankless NFL punter - the guy who gets the call when you give up. Someone please hike the ball to Spike ? 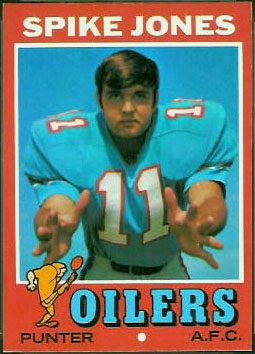 By the way, which one is pink ?:
The rock band Pink Floyd fielded such a question when reporters wanted to know the band member's names. If you were not familiar with the Redskins of the 1970's, then your guess was as good as anyone's to which guy in this pre-game ceremony was Chris Hanburger. (hint - he is not carrying a flag) 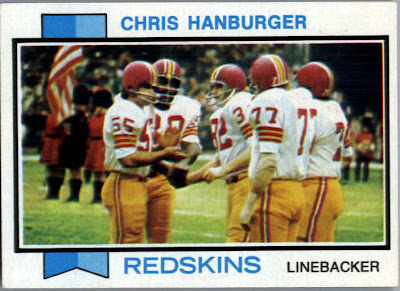 And Now a Word from Our Sponsors:
Garo Yepremian's 1971 card looks like a suburban car ad from LIFE Magazine. What goes better with jaw-crunching football or soothing field goals - than the family station wagon. (pre-mini van for you youngsters) 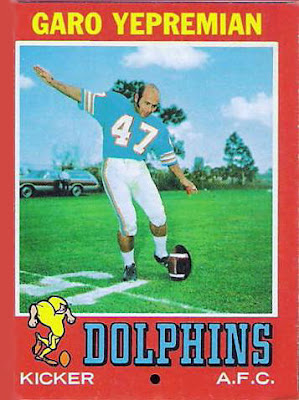 Fame, Shmame:
Good ol' Claude Humphrey was big time in Atlanta. But the Falcons were the opposite of world-beaters in the 1970's. So if you are going to be remembered on a football card, it may as well be pictured tackling a Hall of Famer. Here Claude claws Cowboys legend Roger Staubach. 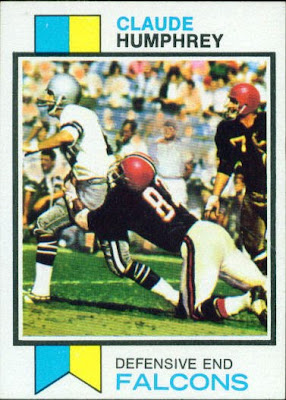 Friends in High Places:
To say that Bob Windsor was a well known football player - is well, a stretch at best. But Bob did have his fans. I think this 1974 card may just be the only one on record to be rooting for the player on his own card.
A closer look at the top right corner shows that either Bob had a mole inside Topps or his fans were more prevalent than the John 3:16 fanatics of the 1970's. (Bob Windsor NFL No. 1 tight End) 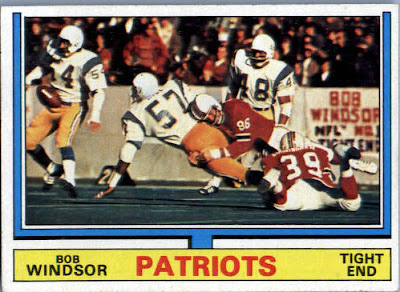 All posts about 70s football cards are welcome! After I finish a few of my baseball collecting goals I'm going to start going after 70s football sets.

Bob Windsor once told me the story behind that card. Sam Cunningham had fumbled and #57 picked up the ball. Windosr tackled him causing another fumble, which Cunningham picked up and ran for a 40 yard TD.
Also, does anyone remember the Pro Draft game which featured real fb cards, some of which were different than the Topps regular issues? Windsor had one of the different ones.