We had a tradition every year to watch a certain film at a certain time of year. Like some people watch the Wizard of Oz or Rudolf the Red-Nose Raindeer or Its A Wonderful Life - we would gather around to view our personal copy of the Canadian classic - The Adventures of Doug and Bob McKenzie: STRANGE BEW.

The story of everything Canadian - from a stereotypical view - beer drinking, hockey-loving, people from the Great White North ending every sentence with, eh ?

Well that time is here as this comedy farce tracks the mishaps of the McKenzie brothers - Doug & Bob - who need to get jobs and end up at the local brewery just in time for Octoberfest - I present these 1972-73 custom hockey cards. 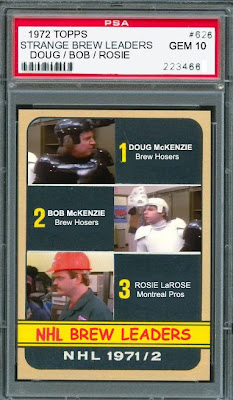 I will refrain from giving away more of the film except to say I recommend it - with beer - and a hockey chaser.

I have created these two custom cards in honor of our friends at Cards on Ice - who are running a contest. Giving away some ITG 1972 hockey cards. 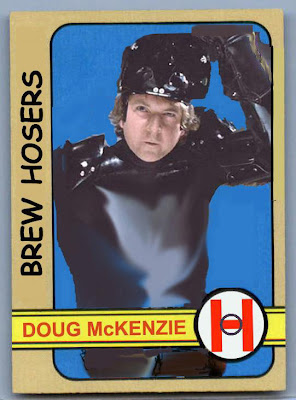 As a tribute to the fellow blogers and Octoberfest and 1972 hockey ... enjoy these cards, eh ?
Here is the original trailer - STRANGE BREW
Rooo-cooo-cooo-cooo-coooo !