There is a fine storyline in the film "Field of Dreams" where a young ball player grows up to be a doctor. The interesting thing is the character - Archibald "Moonlight" Graham - was a real ball player and a real doctor (1 game -1905 N.Y. Giants).

In the more modern era of professional baseball, along came Bobby Brown of the New York Yankees. He appeared in 4 World Series with the "Bronx Bombers". 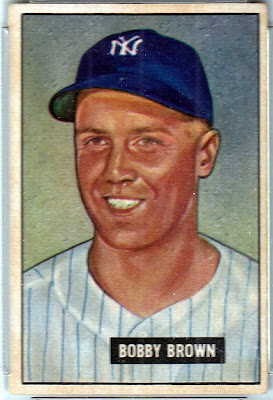 After his playing career, Brown took up as a cardiology doctor until the 1980's, when he returned to baseball. He left his Texas practice to join the Rangers organization. He then succeeded to the American League Presidency which he served from 1984 to 1992.

Giovanni "Johnny" Berardino was a major leaguer from 1939 to 1953. A shortstop for the St. Louis Brown and Pittsburgh Pirates. He also won a World Series with the 1948 Cleveland Indians. 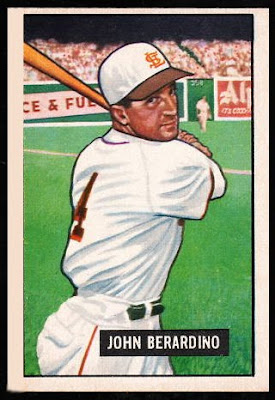 After his playing days, Berardino honed his acting skills. As the old commerical said - "I am not a doctor, but I play one on TV."
Among other film and TV stints, John became a household name as Dr. Steve Hardy on the soap opera General Hospitol. The memorable character earned him a star on Hollywood's Walk of Fame.
Posted by Chuck's Used Cards at 2:37 PM

ummm... Randy Gregg. After obtaining his medical degree, he went back to playing hockey, as a defenceman for the Edmonton Oilers during their Stanley Cup years.

That can be useful when you need to be stitiched up ... Thanks Capt'n.

Those hockey guys are always smarter than they look.