What is great about some current international MLS players is finding some of their soccer cards before they came to America. One of these stars is the Columbus Crew's Guillermo Barros Schelotto - 2008 League MVP. 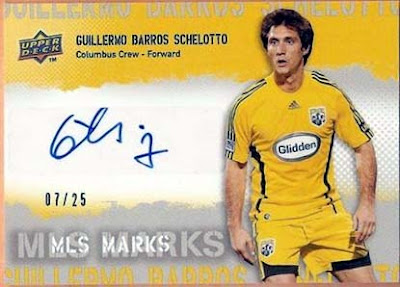 An icon and idol of Argentina soccer, he was a hero of the terraces at fan-crazed Boca Juniors. In a recent trade with my friend Michel from Texas, I recieved these 1996-97 Pepsi Futbol cards. 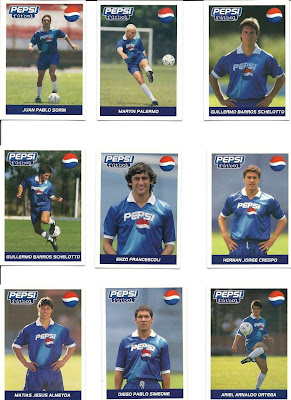 They included Argentinian national team players dressed in Pepsi jerseys. Each player appears in a portrait and action pose. I believe there are 50 players in the 100 card set.  Obviously with international players, it is star loaded - including Enzo Francescoli, and Hernan Crespo.
In addition, the trade also featured these 2000 Pepsi 3-D cards. Although scans never do justice to these, the 2 second flicker of action records some spectacular highlight of the player on the card. While there are some nice goals, the one card that I think is exceptional is a save by Paraguay's World Cup goalkeeper - Jose Luis Chilavert - of Velez Sarfield. 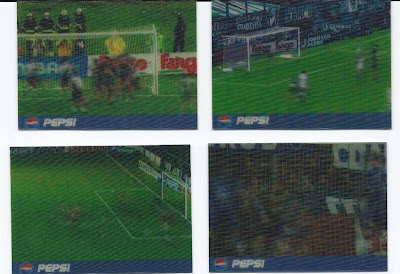 The commercializaion of trading cards has come a long way from the cigarette cards of our grandfathers. It definitely makes for some interesting trading and collecting.

If you have any unusual soccer cards you want to trade, let me know.
Posted by Chuck's Used Cards at 1:06 PM

Dude i wish i had stuff to trade you but i don't i have a mess of football card from the 80's but most of my collection is baseball... And i have nothing you listed on your want list....Anything you would be willing to trade for?

You would be suprised what can be picked up cheaply on ebay or from sports shops !

I am missing lots of soccer stickers that go for .50 to .99 cents. Any MLS Upper Deck inserts from the past 2 seasons ...

I do not have any Champs Hockey minis or OPC retro hockey.

I'll still take any A&BC or Topps soccer cards - and there are a few old NASL team sets that I do not have that are less than $5 on ebay.

I will trade for any of these generously.

check back with offers ...