When I talk to people about some of the cards sets I collect, I sometimes (erroneously) assume that they are familiar with these soccer collectables.

So, maybe there is educational value on these here pages.

Even the beginners know that Panini stickers have albums to put the sets into. But they are far from the only ones, as card albums go back to at least the 1920's for soccer cards.

The fact that fewer and fewer card makers have albums for their cards is a bit disheartening.   Which brings me to a manufacturers from the 1950's and 1960's that had wonderful cards and some colorful albums to match. In their heyday the CHIX Confectionary Limited sold candy with their soccer cards. 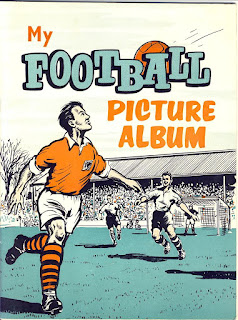 Some of the colored renditions of star player truly have held their own even by todays glitzy, memorabilia infested card world.

The above card was meant to be adhered into the aforementioned album. Not long after the last of the cigarette card era, most examples still came in the size of tobacco issues.

But things were changing by the 1950'sand cards were almost the product that sold the item.  In this case, the cards sold the candy and the samples became more colorful and elaborate.  By the 1960's most soccer cards were full color and larger.

I recently landed this 1960 CHIX STAN MATTHEWS for the collection. 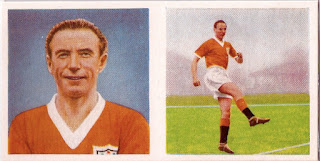 The double photo fronts have an outstanding portrait shot and a nice posed action photo to match.

The card backs are black and white but score a triple by adding a cartoon caricature of the player.  So more "Stan art" goes into my collection. 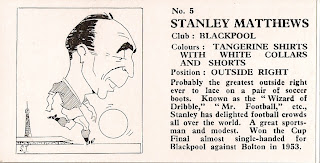 There are some CHIX issues that are very short printed and highly desired for their magnificent painted portraits. I will be looking for more Chix examples for my type collection.

A fellow collector - Alan, was kind enough to send me a pair of BERGMANN cards. They both were signed by players from West Germany's 1974 World Champions.

Hubert "Berti" Vogts was a tenacious defender for Borussia Munchengladbach. He helped his club to 5 League titles in the 1970's and part of the dynasty for Germany's 1972 Euros and 1974 World Cup sweep. He would later manage his own National Team to the 1996 Euro title. 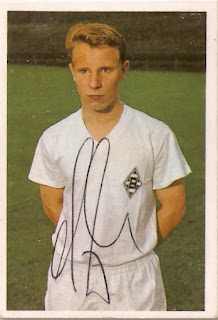 "Der Terrier"had a reputation that made Vogts one tough defender.

Josep "Sepp" Maier was the Bayern Munich goalkeeper and also key to the 1972-74 German successes. At Bayern he not only won 5 League titles but 3 European Champions League trophies. 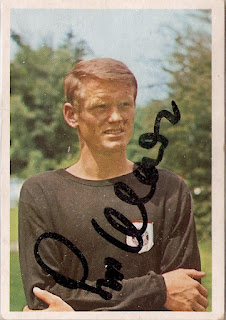 Alan probably has one of the finest vintage pre-war collection in North America. I appreciate his additions to my collection.
Posted by Chuck's Used Cards at 7:13 PM

Fire me your address to martynheap@yahoo.co.uk I have some Liverpool stuff for you!