He was known as "Fatty" Foulke because he weighed as much as 24 stone - the British equivalent of 331 pounds ! However, at 6 ft. 4 inches he also covered the goal which he kept safe for Sheffield United, Chelsea and Bradford City. 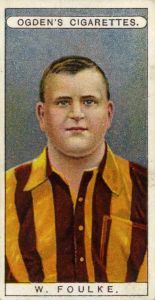 He appeared once for England at the International level in 1897. 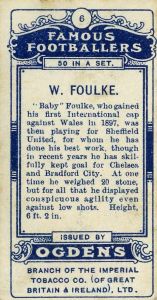 In later years he became quite the crowd attraction. He placed two boys behind his goal to distract the opposition. They often retrieved balls for him, by fortune, inventing the first use of "ball boys".

In my pursuit to collection all the one hundred top Football League players, here is my count so far: