More TOPPS minis - We Used To Call Them Cigarette Cards

They call them "mini" cards today. What was once the standard size of a sport card, sold as a premium with cigarettes, are now inserts, chase cards or subsets.
The 2013 TOPPS MLS set has included a subset of 15 mini cards. I've picked up 3 of these which I have deemed the best of the lot.
LANDON DONOVAN is the USA's all-time leading goal scorer with 57. He is 2nd in appearances with 154 caps, but 1st in games started. He is also 1st in assists and total points for the US National Team. He is a slam dunk future Hall of Famer and probably the best known American soccer player. 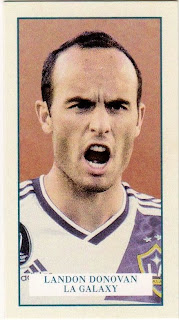 Landon Donovan
THIERRY HENRY is a the all-time leading goal scorer for France with 51. The Red Bulls star, retired from international duty, finished with 123 caps.
Winning the MLS league title (Supporters Shield) with New York this season, he now has championships in France (Monaco), England (Arsenal), Spain (Barcelona) and the US (New York).
In addition, he is the all-time goal scorer for Arsenal (174 league goals), has won the Uefa Champions League and the FIFA World Cup. He has won the Cup in both England (FA Cup) and Spain (Copa del Rey). Already a member of the English Hall of Fame, there is little else he can achieve. If you get a chance to see this legend play, take it. 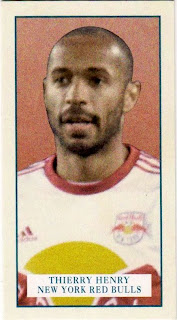 Thierry Henry
In keeping with the theme, ROBBIE KEANE is the all-time leading scorer for the Republic of Ireland with 61. He is also the most capped with 130 appearance. He is still active and will probably add to these numbers. He has scored a whopping 126 Premier League goals.
He has won the League Cup in England (Tottenham) and two MLS Cups with the Los Angeles Galaxy. 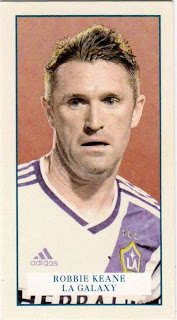 Robbie Keane
This is a very manageable subset that can be easily collected for under $50. Although there is no tobacco product connected to these, they fit in well with cigarette card collecting.
DO YOU OWN ANY MINI OR CIGARETTE CARDS ? WHAT IS YOUR FAVORITE ?