2014 World Cup Stickers and Albums
The last time Panini sold the stickers and albums, it sold 1.5 billion worldwide with 12 million in North America. These will be available in April.


2014 World Cup Prizm
This will be a worldwide product. Each continent will get its own Prizm-colored borders.
Autographs in this product include Pele, Lionel Messi and David Beckham. It is due out in June.


Panini debuted a World Cup sticker card set in 1970. This past year, a complete set of the 1970 sold for over $4,000 on ebay. Panini supplimented its sticker release with standard trading cards sets beginning with the 1998 World Cup. 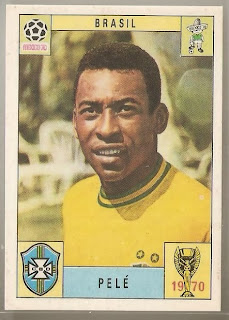 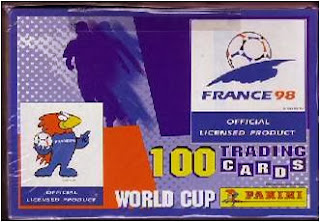 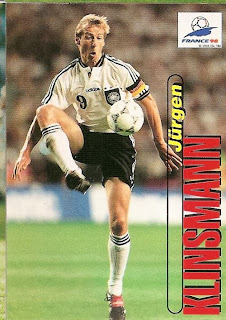 1998 Panini World Cup card - Klinsmann
I am looking forward to seeing what will be produced by Panini for this tournament. Hopefully, Panini America will put this on the front burner as sticker-mania comes into full swing.
As we find out which teams round out the field (after November play-off matches), it will be interesting to see what regional sets will be produced.
Stay tuned as I find out, I will present them here. I will also be looking back at some of the more memorable issues of World Cup collectables in the coming months.
Posted by Chuck's Used Cards at 5:10 AM

Hello, would you be able to tell me where to buy these packs in New York metropolitan area?, thank you,
Maurizio

Will you please tell me where to buy these packs in New York area?, thank you for info,
Maurizio

Hi Maurizio - the preview cards for Panini World Cup are now out. The stickers should be ready for market after the final roster have been given to FIFA (May 2014). The official card set will follow.
Check with your local sport card shop (plenty in NYC area). If that falls short, get on the internet and see who is taking pre-orders now.
As a last resort, email me once they are out - I will get you some after I collect a few boxes.

I have stickers to trade, anyone interesed?

Jay - I've got stickers from 1990 sets onward. Let me know what you have to trade.