This coming from a TOPPS friendly blog http://lifetimetopps.wordpress.com/2014/01/07/blog-bat-around-lost-cards/    - cards of player we wished were included with sets, but were not.

As an avid card collector in my youth, there was little regret except for the absence of soccer player cards from the Topps Chewing Gum Company.

Sure, there were regional soccer issues from Burger King, 7/Eleven, Herfy's and Essay Meats.  What would have been great was one uniform set that included all the teams in the old NASL.  It woud have done wonders for interest and preserving the history of the game in North America.

TOP 5 Cards that should have been produced ...

1. So 40 years later a small, unlicensed company in England has accomplished this dream. SCORE has produced a series called INTERNATIONAL STARS that depict some of the World's Greatest in their NASL jerseys. 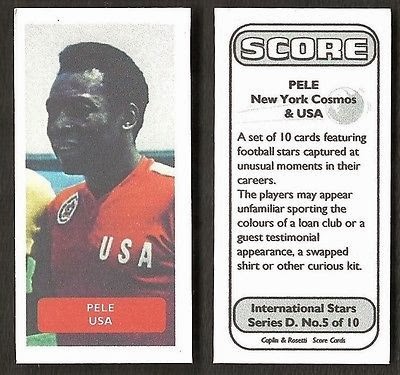 The Legendary Pele' suited up for an NASL All-Star Team to playing in the Bicentennial Cup against the National Teams of England, Italy and Brazil. The Team wore USA jerseys, although it was not an official US National Team. 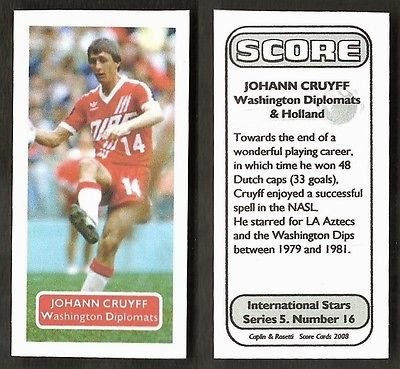 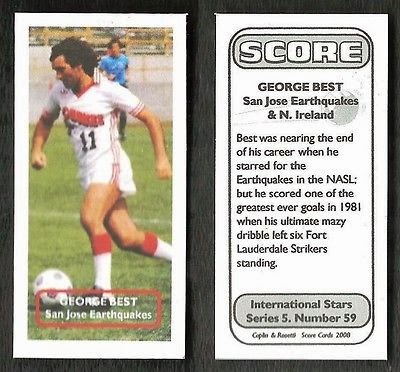 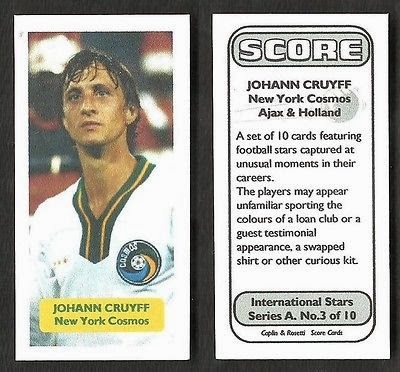 Johann Cruyff joined the Cosmos for one exhibition match and was immortalized in their jersey.
How I would have loved to have collected these back then. Topps now produces the MLS cards. Hopefully, they can make up for lost time by including some of the past greats that played in America.
2. Because of his exclusive contract with Anglo Confectionery, George Best was not included in any of the A&BC card sets from 1969 to 1974. He re-appeared in the 1977 Topps set.
3. Upper Deck skipped making MLS cards in 1998, 2001, 2002, and 2003. These were crucial years that would have included Landon Donovan, Taylor Twellman and Dwayne DeRosario rookie cards among other.
4. 1992 Topps Stadium Club should have included JOHN HARKES. who had scored what was voted the "goal of the year" and upset Manchester United in the 1991  League Cup.  Harksie should have made it into the 1994 Merlin card set as he took Sheffield Wednesday to both the League Cup and the FA Cup in the same season.
5. Upper Deck dropped the ball (again) as it abandoned producing World Cup Cards after the (1993 preview set) and USA 1994 set. One can only imagine what might have been producing sets for 1998 or 2002 - cards of Thierry Henry, Zidane, Ronaldo, Robbie Keane, Ronaldinho and Beckham.
Karma is a heavy burden. Now look at what Upper Deck has left. Not much.
Posted by Chuck's Used Cards at 8:47 PM

Those soccer cards are awesome !! By the way, please email me your address so I can send you your prize !! Thanks !

Those soccer cards are awesome !! By the way, please email me your address so I can send you your prize !! Thanks !