I've never really been a big autograph hunter and I have my reservations about paying for a person's autograph. However, it's a new year and I have to believe that a person should be open-minded. In that new light, I have embraced the idea of autograph cards being bought and sold.

It's not that I never have gotten an autograph, just that I used to get them free. Even my days as a sports writer I got one or two, here and there - between interview and games. In my second phase of collecting (1.boyhood - 2.college - 3.semi-retirement) I got a few signatures from baseball players attending card shows - Willie Mays, Joe DiMaggio and Willie Stargell to name a few.

Fast-forward to 2009 where my collecting goals are aimed more at hockey and of course Olympians. Well I am off to a flying start as I added 3 - all which fit into my plans. First is DANIEL ALFREDSSON, the Captain of the Ottawa Senators and a Gold Medalist from the 2006 Winter Olympics. 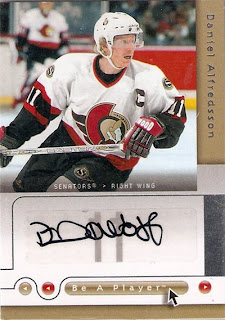 The next two cards (BAP signature cards - ROBERTO LUONGO and MIKKA KIPRUSOFF) were such a bargain that I could not pass them up. I have to say I detest, loathe, hate and despise poorly signed cards and sticker autographs. And these two goalies are better at holding pucks than pens. Never-the-less, the cards are hard signed (no sticker) autographs.

Both goalies are former international players. Luongo played for Canada in the 2006 Olympics while Kiprusoff represented Finland in several tournaments. 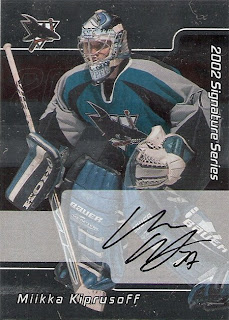 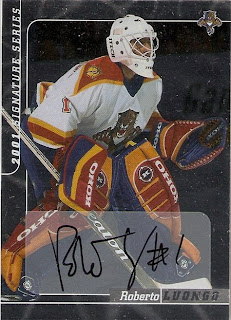 As I was finding a new home for these hockey autographs, I uncovered some closeted sigs from the past. A 1981 fleer - KEN SINGLETON - signed on the back. Ken was a star player with the Montreal Expos and Baltimore Orioles. When you get a signature in person, it's hard to tell the person how to sign, you just walk away grateful. This was my case with Ken. 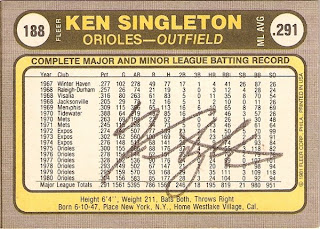 In 1982 STEVE BALBONI was a hot commodity. His rookie card, 1982 Topps was on the top ten radar for collectors. As a Yankees' prospect who could hit big home runs, there was great expectations. Steve was one of the star guests at a local benefit so I got him to pen his rookie card. Unfortunately, my expertise about marker pens was crap. Subsequently, the ink did not take well. 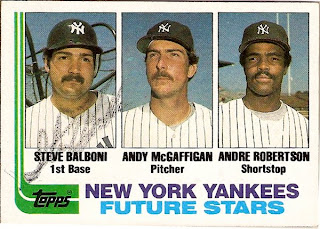 The above two cards are probably good reasons to purchase company signed cards. However, the experience of meeting players cannot be substituted.
Posted by Chuck's Used Cards at 7:41 AM