Beckham-mania may have cooled in America, but it may be attributed to the season being over ... and that the player has been loaned to Italian League Giants - AC Milan for a few months. So the craze has shifted back to Europe.

Proof, you say ? Well, how about this: " Panini Beckham Sticker Causes Panic" 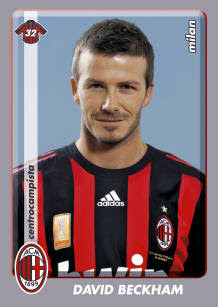 Panini, the long time producer of sports and collectable stickers has produced a special sticker not included in the set. The Italian based company offices has been inundated with over 1,000 calls a day asking for a copy of the sticker.

In a related story of money, Beckham's teammate - the Brazilian KAKA' - is wanted by English club Manchester City. They are offering $160 MILLION dollars ! Yup - and they are willing to add another $100 million dollars to entice the player to sign a contract. Can you say Cha-Ching ! ... or is that Barra-Bing-o ! 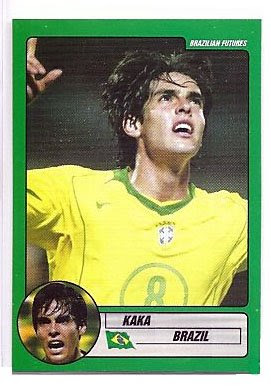 Lastly, in this vein of filthy wealth - comes the headlines that Manchester United's superstar CRISTIANO RONALDO has wrecked his $300,000 (200,000 British Pounds) Ferrari on the way to training.
No problem, he just called relatives to pick him up in another one of his luxury vehicles. Is it any wonder why so many American soccer players want to earn their living in Europe ? 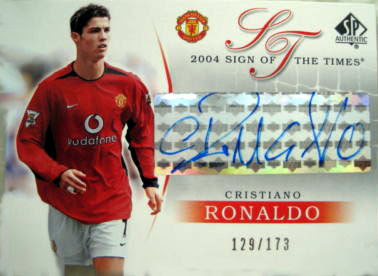 On a side note, this Upper Deck SP of Ronaldo autograph card went for $700.00 at auction. Who needs a stadium seat when you can get a "sports car crasher" autograph ?