The 1920's were hard times yet not unimportant to the CANADIENS hockey club. The club won the Stanley Cup in the 1923-24 season. It would be the last time the trophy was competed for by three different leagues. (pictured are 4 cards from the 1923 V145 Patterson card series) 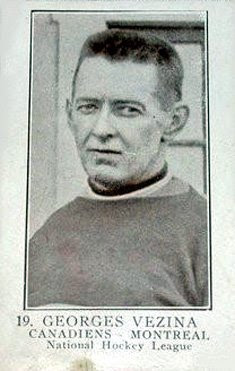 The Pacific Coast was represented by the PCHA Champions - Vancouver Maroons, while the Calgary Tigers of Western Canada won the WCHL. Montreal had to play them both in a series to win the Cup. 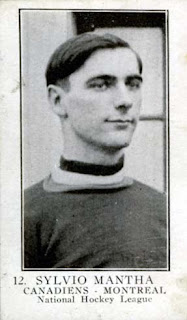 Captained by Sylvio Mantha, and backstopped by the league's top goalie - Vezina, the scoring was handled by Billy Boucher (2nd in NHL) and Aurel Joliat (3rd in NHL). 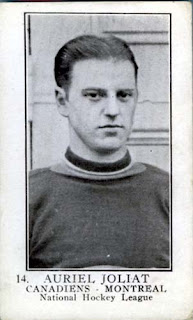 A rookie by the name of Howie Morenz placed 8th in the league scoring charts and led all scorers in the play-offs. 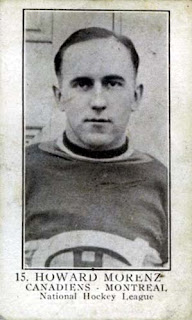 Unfortunately, George Vezina would die in 1926. His legacy is kept in the trophy named after him which the club donated the following season. However, his legacy did not stop there.
Dr. Brian Price would purchase Vezina's goalie pads for his company - In The Game (ITG). He would make the controversial decision to cut up the artifact to include pieces of it in his 2000-2001 Be A Player Memorabilia series of hockey cards.
He sold the packs for an unheard of $99 each - and sold out all his stock. These were also the very first card products to be sold encased in protective plastic. The hobby has since changed as never before as more and more companies follow this formula of numbering and limiting special edition trading cards with memorabilia. 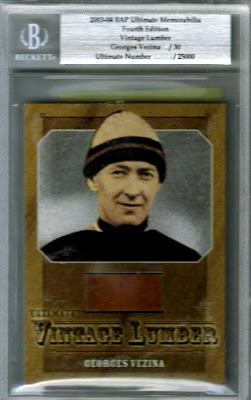