I am typing this as I watch Canada and Sweden play for GOLD in the World Junior Hockey Championships. But the recent post-holiday mailbag has brought some Hollywood beauties to my doorstep.
I got 4 Film Stars for the 1934 Players Cigarettes series.

The first of these is Jean Harlow - the Blonde Bombshell - the platinum blonde that started the trend of light-haired babes. Marilyn Monroe, Jane Mansfield and even Modanna are copies of this original. One trait all four of these ladies share is their spit-fire mustang personalities. No wall-flower daisies in this bunch. 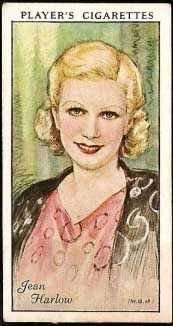 She starred in Howard Hughes' production of Hell's Angels (1930) - perhaps the greatest airplanes in dogfights film ever made. She became a box office favorite opposite Clark Gable in six movies and is remembered for cinema features like Platinum Blonde (1931) and Bombshell (1933). Sadly, she was hospitalized with poisening while making her last film and died before it was complete. She was only 26 - so young like many immortalized actors. Recommended film to see: HELL'S ANGELS. 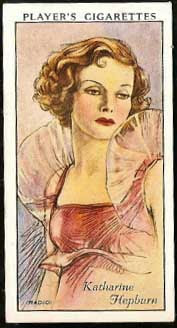 Next up is Katherine Hepburn. not a great favorite of mine, but definately number # 1 with the masses. With over 60 years of movies to her name, very few actresses had such an appeal for so long - from 1931 to 1994 - she co-starred with the biggest names in the business - Cary Grant, Humphrey Bogart, Jimmy Stewart and Henry Fonda. In later years she portrayed middle-aged women full of vigor as in The African Queen (1951) and Rooster Cogburn (1975) with John Wayne.
Recommended film to see: ROOSTER COGBURN. 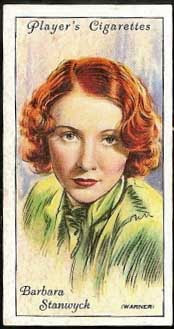 Barbara Stanwyck, probably the slimmest and most petite of this group, is one of my favorite if for nothing else than her attitude. She had a sassy flair, a raspy voice and take-no-crap demeanor. As her movie career began to dim, she signed up for the the new frontier of television. You can see her doing her own stunts in re-runs of THE BIG VALLEY - a popular western series of the 1960's. In another expansive career - 1927 to 1986 - she did everything but win an Oscar from the Academy Awards. It is interesting to watch her with another film star - turned tv parent - Fred McMurray in Double Indemnity (1944). Despite her on screen persona, she was great to work with and endearing to her fans.
Recommended film to see: DOUBLE INDEMNITY. 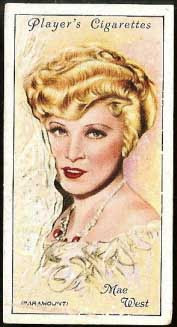 The last of this quartet is Mae West. You have to love a woman who could write a play called SEX and then got arrested for it. She was know for her sexual inuendos in films like I'm No Angel (1933) and Belle of the Ninties (1934) her delivery and all the while was never, ever less than a lady. Surprisingly, she only made 12 movies and yet left such a lasting impression. She starred in hollywood at a time that the Motion Picture Production Code was established.
Being smarter than give credit, she began writing her dialog in double-speak, where what she said could be interpreted in several ways - thus getting around the strict codes. Uttered the famous line "come up and see me some time".
Recommended film to see: Sextette (1978)
The wonderful thing about collecting cards like these - rather than new stuff - I got these four cards plus one other actress for a total of $2.00.
Posted by Chuck's Used Cards at 5:09 PM

dude... thanks for the help! even if it was unintentional...

Outstanding! these cards are gorgeous. Of course, so are the subjects.