The Great Depression was more than just an economic era. It was a tragedy that perpetuated within itself. The success of the last decade flowed strongly into the next. Les Canadiens won their second Stanley Cup in a row in the 1930-31 season.

Howie Morenz who had continually led the team in scoring, finally became the league's top scorer as well. 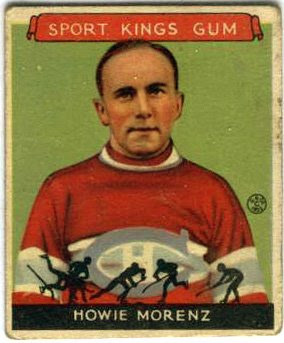 But things changed very quickly with the depression. Three-time Vezina winner George Hainsworth was traded away for Lorne Chabot. Chabot did well in winning the Vezina in his first year with Montreal. However, he was soon traded along with Morenz to Chicago the following year. 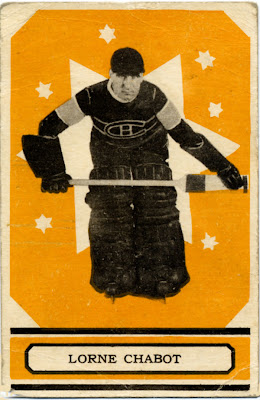 The Canadiens would not win another title in this decade and lost many of their stars in efforts to keep finanacially sound. Morenz returned for the 1937 season only for tragedy to strike. He broke his leg in an on ice collision and was hospitalized. Unfortunately, he died through complications. A memorial game was played for his benefit, much like the one he played in for Ace Bailey. 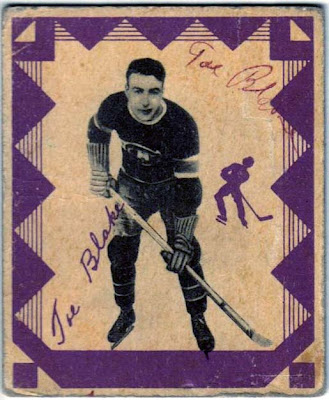 One of the young stars that was added to the roster just before Morenz's death was a Hector "Toe" Blake. Blake would be the only other Canadiens player to be top scorer in this decade - toping the league in 1938-39.

Another Montreal star and MVP of the 1935-36 season was Albert "Babe" Siebert. When Siebert hung up his skates at the end of 1939 he was named as Head Coach of Montreal. Tragedy struck yet a gain as he drowned in August of that year having never recorded a win, a loss or a tie as coach. This was the hardest decade for the Habitants who began with glory and struggled through the 1930's. But greater things were to come.
Posted by Chuck's Used Cards at 1:56 PM

Very interesting post and AMAZING cards. That Goudey Morenz card is unreal, I'm getting on eBay right now to see what they go for. I shudder to think...

Good luck Shane. But its worth getting at least one vintage hockey card to see what guys used to collect - to hold it in your hand.