Growing up in the 1960's when television and NFL football were a marriage made in heaven, life was pretty cool. A broadcaster that epitomized the smooth and generic was a guy named Curt Gowdy. He did all the big sports from the Super Bowl to the World Series and even the Olympics.
He later hosted a TV show called The American Sportsman - where he took celebrated athletes to hunt and fish.
I get this nostalgic as I look at the Arizona CARDINALS - a franchise that has long been absent from the spotlight. So it is fitting that a veteran player - KURT WARNER - has taken them back to the limelight. Here's looking at you old dude ! 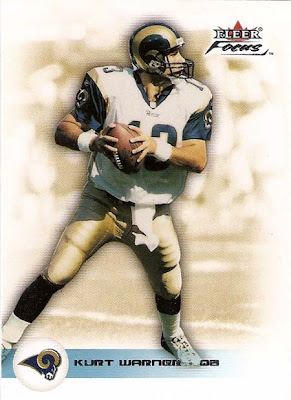 Another whiff of nostalgia comes from a recent pack I finally got around to opening - 2008 Goudey baseball. I really like this set. I like it for its design and also for the bright colors which remind me of the 1970's. No glossy, no gold print, no hologram or refraction - just plain ole good poses of players.

There is a nice mixture of new players and many retired ones in the set. In addition to the baseball stars there are athletes from other sports as well. Unfortunately, I did not pull any of those in this pack. However, I did manage a Sports Royalty card of Andre Dawson. 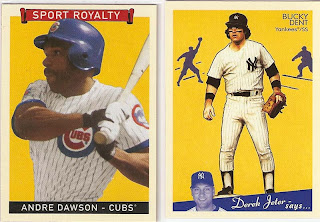 I also happen to get one of the Game-Used cards which is as thick as a stuffed crust pizza. I had to search for an extra wide sleeve to fit the card. 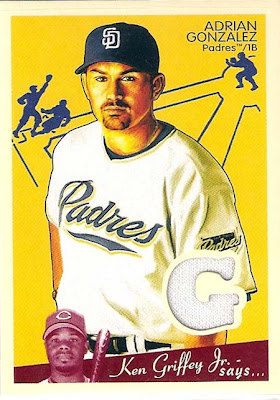 I know there is a few Cubs, Rangers, Padres, Marlins and Brewers fans out there. So, if you need these for your sets - just shoot me a mail. I'll take Red Sox, Yankees or some of the other sports I need. (Olympians and soccer players preferred.

EPILOGUE: Today the 44th President of the United States was sworn into office. After witnessing the outpouring of energy during this event - I can honestly say, I was proud to be an American today. No matter who has taken residence in our Capitol, we have done it without bloodshed and with hope and glory since 1789.