One of my favorite cartoons was the Warner Bros. - Looney Toons - Bugs Bunny. Here was a character with smarts. Probaby smarter than a few NFL players of late (one's that shoot themselves in the foot).
There was en episode where Bugs matched wits with Daffy Duck during the hunting season - called "Duck, rabbit, duck". They get into a shouting match and exchange yelling "duck season" and "rabbit season". It kind of reminds me of sports fans and their favorite sport arguments.
Anyway, to me when the weather gets cold, its definately HOCKEY season. Time for hats or touques as our Canadian friends say. Time to grow beards and wear gloves.
In the days before rally beards and stubble, pro athletes were expected to be clean shaven. That was until the groovey 1970's came along. Joe Namath with the fu-manchu mustache and Thurman Munson with the stubble beards.
Then there was Bill Flett ... who made Grizzly Adams look like a boy scout. Nicknamed "Cowboy" because in addition to his NHL career Bill was a rodeo performer. He was often fined by his club for participating on the rodeo circuit. Like a true legend of the West, Bill was one of the last players to play without a helmet. Good old fashion hockey. 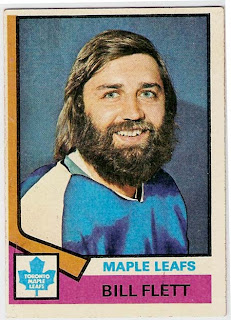 Speaking of old time hockey, another fellow blogger was looking for cards that had good pictures of hits. I've always put this card to the side (since grade school). This 1973-74 Topps Phil Roberto card shows the aftermath of some dropped gloves. This - in the days before fight straps were part of the equipment. 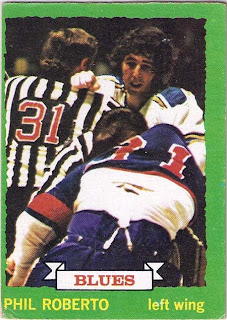 Coming up on New Years Eve, two of the original 6 NHL teams will play outside - YES OUTSIDE - at Wrigley Field in Chicago. The Blackhawks and Red Wings will and play the old game. So don touques and wear your beards - its hockey season !

That Phil Roberto card was in my first pack of hockey cards. I was immediately hooked, although I never found another card quite that cool.

Cards like that did not need gloss, special embossing or any other such silliness.