Turning Over LEAFS in TORONTO

Well it is finally done. One of Canada's best has come home. After four Championships titles (two with San Jose and two with Houston) Ontario native Dwayne De Rosario has been traded to Toronto FC. Seen here on this 2008 Upper Deck - with a wicked team patch - De Ro will be right at home in Canada.

The reception he got at this summer's MLS All-Star Game in Toronto was high-lighted by his late Penalty Kick against West Ham United. 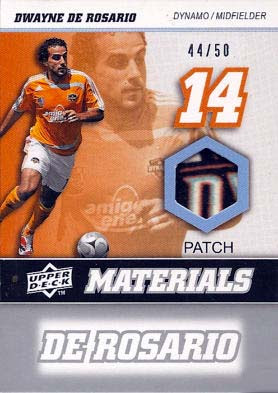 Speaking of TORONTO ... when I was covering NHL games for FLA Hockey Magazine, I met the oldest living MAPLE LEAF - Murray "Army" Armstrong. At age 93 he has some great stories about the game. He played in the 1938 Stanley Cup with Toronto and later played with both the Detroit Red Wings and the now defunct New York Americans. One of his claims to fame is that a young player that came up to take his place on the Detroit roster was Gordie Howe.

The second accomplishment was being awarded the Lester Patrick Trophy. In a twist of longevity, Murray was actually friends with Patrick. Armstrong went on to coach in the NCAA - winning 5 titles and developed several NHL players. After almost a year of planning to do so, I got Murray to autograph a few custom made cards that I designed like the In The Game series. 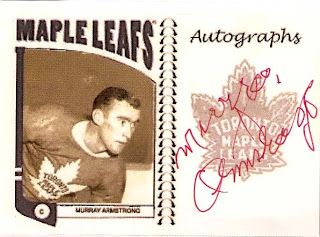 Your blog has now been added to the Sports Card Blogroll.

thanks JayBee ... see you around the bases,