It's definitely not how I wanted it, but it happened. Spain got to the 2010 FIFAWorld Cup Final with another 1:0 win. They didn't do it with all the hype surrounding their stylish forwards or skilled midfielders - it was a rugged, long-haired defender who did the business.
Carles (don't call me Carlos) Puyols - part of the star-studded Barcelona F.C. team that swept 6 trophies into thier showcase last season, headed the only goal against Germany.
It just so happened that I had this gem (2005 Futera) laying around waiting to be displayed: a 24k gold plated card from FUTERA, numbered to only 111 and containing a "memocell" photo and a two-color swatch from his Barcelona jersey. 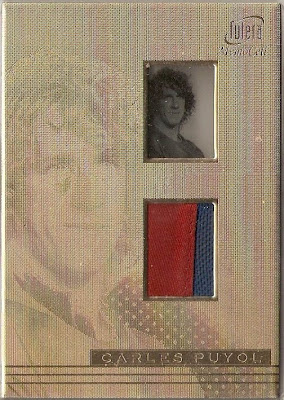 That this one is absent of an actual number, means it was used for promotion. They are quite heavy and the player is etched into the metal on the face of the card. Fortunately,  these cards made by the UK company are only rising in value. 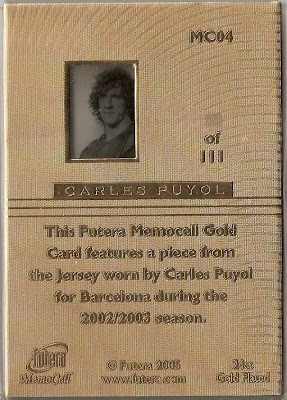 What I like about them is that they are truely "hard to find", and are actually limited editions - with runs of about 500 cases world-wide.
So if I have to look for the silver lining (or gold) to Spain's victory, it might as well be this card.
Posted by Chuck's Used Cards at 12:09 PM