Making My Own Cards - Sketch Art

Sometimes the answer to the simplest dilemas are right in front of us. I have been pre-occupied with my comic book art and making sketch cards of super heroes. While I still have a soft spot for sports cards, the disillusion of many of the products and the high cost of vintage has been prohibitive.
So, I decided to make some of my own cards. My heroes, my favorites, my opinion of the most significant players in the sports I like.  After finding my BOSTON BRUINS signed pennant, I was inspired to have a Bobby Orr autograph.
With the price of BOBBY ORR cards holding at premium value, he was the first choice to produce my own 1/1 sketch card. 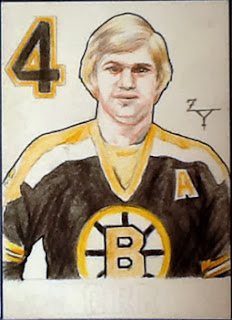 To be fair, I caught a glimpse of the LEAF sketch cards that have popped up on ebay. Oddly enough, some of these were done by artist I started out working with on other sets for  Topps and Rittenhouse.
But to be honest, the quality was not what I expected. That is not to deminish the talent or styles of any artists - art is and always will be subjective.
I leave the opinion of my own art to those who look and, in some cases purchase the cards. I stopped working for the card companies that paid me only $5-10 per card and began selling my own at a substantial increase to my pocket.

Still the All-Time homerun king in my book, HANK AARON was drawn after watching ESPN Sports Century espisode that featured him.
Since I've started on the record holders, I had to include the greatest hockey scorer in my lifetime - WAYNE GRETZKY. 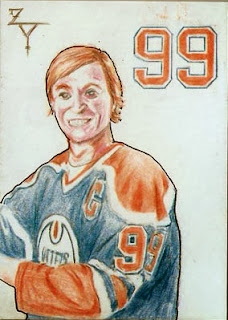 Last of the group is the hero of my childhood, and part of the Montreal Canadiens dynasty - KEN DRYDEN. 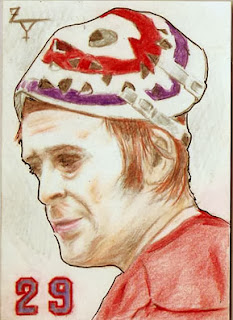 The design on the Orr card was left in that stage as I my have grand thoughts of having them signed by the players themselves. Although this is highly unlikely, one can dream, can't one ?
WHAT PLAYER WOULD YOU LIKE TO SEE DRAWN ON A 1/1 CARD ?