Just in time for the start of the NHL season I  found this BOSTON BRUINS pennant at the flea market last week. It had a wonderful NHL seal dominating the pennant with the year 1924 - when the Boston Bruins entered the NHL.

I know I hadn't been able to afford a Bobby Orr autograph on the regular market, so this was paramount in landing a great white whale. Someone took a great deal of time to put these signatures together.

The pennant was encased in a hard plastic sleeve. On the reverse were some old school lable maker tags identifying most of the autographs. Tucked in there was a ticket for a 1990's signing for Vezina winner Jim Carey.

Apart from the last Bruins' Stanley Cup winners, there is a good representation from all of the club's successes from the 1940's to the 1990's.
Here are the 23 Bruins fan favorites including (ten) 10 HALL OF FAMERS *:

Some of the more interesting non-Hall of Famers are Lyndon Byers, who is known for his post-hockey career in film and radio. He is known in Boston for his on air radio antics.

Joe Juneau held the rookie record (1992-93) for most points in a season by a left wing. He was an Olympian who won the Silver Medal at the 1992 Albertville games.

Barry  Pederson was part of the historical trade that sent Cam Neely to the Bruins. Pederson returned to end his career with the Bruins. 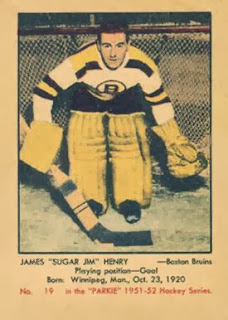 
If I could have had Eddie Shore's autograph on the pennant it would be the entire history of the club on 15 inches of felt !

got your message about downsizing... send me an email about what you have and what you're looking for in return.