After 1980, choosing which cards or which company to buy your favorite sports memorabilia became harder. Topps was given a run by Donruss and Fleer beginning in 1981.
Since then, a hoard of card makers have joined the fray. To add to the madness are the producers of unlicensed cards. To be honest, its sometimes a shame.
A certain company (of thieves) recently flooded ebay (where else can you cheat the market beside wall street ?) with unlicensed merchadise. These almost always come from one seller. The cards have no web site, company address or location.  Ebay is the only place to find them and they have done nothing to stop the illegal products being sold.
Here's the thing - 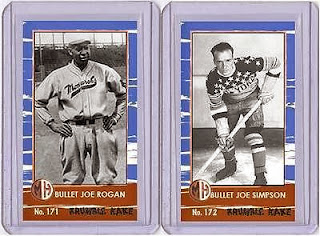 I really like these cards. They have a nice design, they are cigarette card sized and the selection is quite alluring. 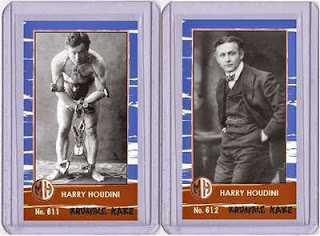 There are all the major sports - baseball, basketball, football, hockey and soccer. In addition, there are notable personalities like master illusionist Harry Houdini (see above). 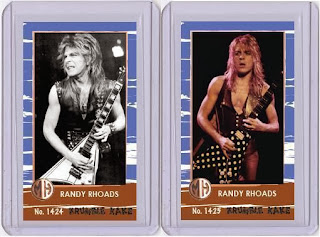 Rock and Roll legends from The individual Beatles - (John, Paul, George and Ringo) to Elvis are in the set. But seldom seen carded icons like guitar legend Randy Rhoads (see above) is also featured. 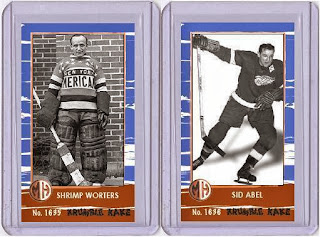 Some of the iconic shots of sports stars are used on these cards. All, which I might emphesis, WITHOUT permission.
The makers of these cards are paramount to printing your own money. And like counterfieters, they will (or you will) ultimately regret having them. They produce these as limited numbered cards. But there is no checklist and no way of knowing how many are actually printed. 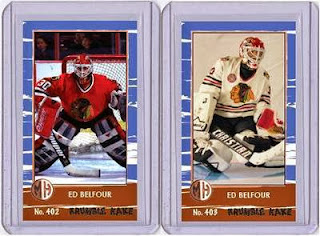 I am encouraging card collectors to shun these for several reasons.
1. By buying these cards, you are aiding thieves. Thieves are not looking after your interest, but their own.
2. If you buy these, you will encourage others to produce more unlicensed cards. The market will be flooded (even more than now) with fakes, rip-offs and cheap cards.
3. Cataloging trading cards is hard enough without unlicensed products. I've cataloged players and sets for over a decade. Although I wish I could, I avoid adding these to the list. (however, I do make a note as you see in this blog)
4. Without a checklist and a governing of how many cards are actually made, you risk buying something that can be printed over and over when you think you have something special. There is no investment in fakes. You will be stuck with worthless merchandise that no one will buy.
I would really encourage the makers of these cards to get a license. Some of these are very desirable cards. But if they sell well, then I may as well just make copies of these cards and sell them myself. (don't think I won't)
How would you like owning a fake fake ? Its that easy and I would easily flood the market with fake, fakes. After all, what can the makers of the cards do to me ? Can they sue for something they have no rights to use ? If I see these on the secondary market, I will start selling fakes.
So be careful and use common sense. Buy at your own peril. You've been warned.