Sometimes its not a long career that highlights an athlete. Sometimes its just one season.
Albert Frederick Brown (born April 1879) was an English professional footballer who scored a goal in the 1902 FA Cup Final for Southampton, and also scored a record seven goals in one match. His date of death is unknown. (from Wikipedia)
Although his date of death may be unknown, he is immortalized on this 1902 cigarette card. 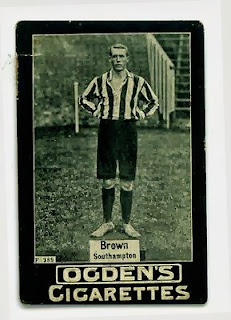 Brown was born in Tamworth, England and started his career with the local Tamworth club, before joining Aston Villa in February 1898. He only made two first-team appearances for Villa in the 1900–01 season (in which he scored two goals) before moving (along with Tommy Bowman) to Southampton in May 1901.
Brown was reputed to be the fastest sprinter in English football and was known as the "Tamworth Sprinter". His career at Southampton got off to a slow start, scoring only once in his first three games before injury forced him to miss three games in October/November 1901. On his return from injury, he started to score more freely and by Christmas he had scored seven goals. In his next game he doubled his tally for the season as he scored a club record seven goals in a match against Northampton Town at The Dell on 28 December 1901. His first goal came almost straight from the kick-off and within five minutes he had completed his hat trick. By half time Saints were 7–0 up, with Brown contributing four. He added three more in the second half as Saints completed the rout (the other goals came from Sam Meston (2), Fred Harrison and Archie Turner).[1]
He finished the 1901–02 season season having scored 25 league goals from 25 games, as Saints ended the season in third place in the Southern League. He also made eight appearances in the FA Cup, scoring four times including Saints' goal in the replay of the final on 28 April 1902, as Saints went down 2–1 to Sheffield United.
During the summer of 1902, he sustained a serious injury which lost him his place in the starting line-up to John Fraser. Brown only made one further appearance for Southampton, before being sold to Queens Park Rangers in October 1902.
After two seasons with QPR, he moved on to Preston North End in May 1904 and then to Blackpool in March 1906, where he finished his career. (from Wikipedia)

Brown did not have a fantastically memorable career. He did have a great game in a great season. This most likely prompted his inclusion in this 1902 card set. And for that, he is immortalized.

This soccer card is now 111 years old. To my knowledge, any person who found these cards in their original tobacco pack is no longer living. I think it would be amazing if we could trace the history of where this card has been over the past century. Did the individual who smoked keep the card until his death ? Did he pass it on to his son or grandson ? Did it get sold to a card collector or an auction house ? Was it misplaced during the First World War or WWII ? Did it belong to a coal miner, a chimney sweep, a soldier or a lawyer ? I wonder.

Like Albert Brown's date of death, we can only wonder. However, I do know where it is now. But I wonder where will it be 100 years from now ?

Have you shown this card before? I think I've seen it blogged about before, or maybe I've seen a blog post of another card and it's individual history.

Hey CaptKirk - right you are !

I have not blogged about this card before as I only obtained this week.

I do have other cards from the series (of 420 cards) which I have featured before.