The Biggest Team in the COSMOS

From humble beginnings to the legendary team that became the biggest sporting event in New York - the New York Cosmos were part of a vision of a former British journalist, Clive Toye.
They played their first season in 1971 and were league champions by 1972. There were only 8 clubs then.

By the time they won their second championship in 1977, they played in a league of 18 teams and lined up exhibition games against the greatest clubs in the world. 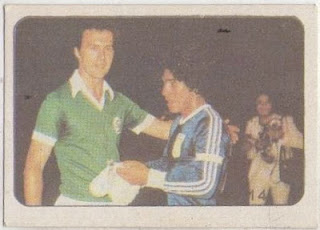 The Cosmos' Franz Beckenbauer greeted a teenage Diego Maradona (above) past legend / future legend met when the Cosmos toured South America. Before Argentine Lionel Messi, now arguably the best player on the planet, Maradona was the idol of Argentina and millions of Barcelona fans.

LELAND'S auctions recently sold some of the collection of the late Hall of Fame writer Ike Kuhns. In the early days, only a few hundred fans came out to watch the Cosmos. A few curious and a few well-knowing journalist did too. One of them was Ike. 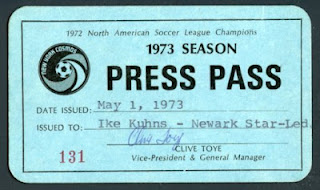 All that changed after Cosmos founder Clive Toye finally signed a player he had pursued for 5 years. By 1975 the Cosmos were not PRESS, but rather MEDIA, and in the world news at every juncture. 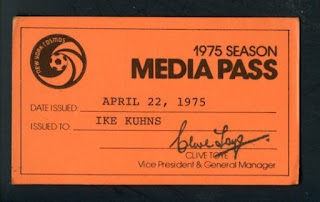 It all came down to the signing of one Edson Arantes do Nascimento, better know as PELE' 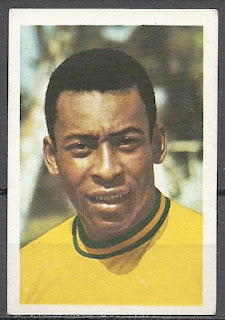 A rare Swedish issue of Pele' for the 1970 World Cup set.

By the end of the year, the Cosmos had dropped the "New York" from their name. They toured all 5 continents and had a payroll that doubled the New York Yankees.

COSMOS memorabilia has become exceeding collectable. So I was fortunate to acquire one of these media cards. This card, signed by two pioneer Hall of Famers - Clive Toye and Ike Kuhns, details the humble beginnings before the meteoric rise of the Cosmos.

The Pele card is nice. Not as nice as the one on your blog header, but still really cool.

Thanks Jeremy - I have a Master List of over 300 Pele' cards. I will be publishing a soccer cards guide before next year - stay tuned !

oool. I'm looking forward to it.

That's sounds cool. I'll be on the lookout for the guide.