Premier League club STOKE CITY continue their tour of the USA tomorrow night. I will be attending their game at the Citrus Bowl against USL PRO Champions Orlando City.

I am hoping new American signing Geoff Cameron (from Houston Dynamo) will make his debut for Stoke along with City's star players - Peter Crouch, Kenwyne Jones and Thomas Sorensen. Hopefully, I will get a few photos to share of the night for upcoming blogs.

I've added another 1975 Topps card to my collection. When I wrote about Stan Matthews having cards in 4 different decades,  I could have also added another Stoke City player - PETER SHILTON. 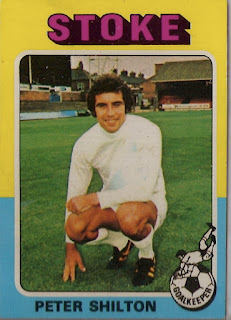 Shilton played a record 125 games for England. He also added a phenomenal 1005 league matches. In total he holds the world record for most competitive matches in professional soccer. He made his card debut in the 1960's and had various issued collectables in the 70's, 80's and 90's until his retirement.

This 1975 card makes my checklist of all but one Topps Shilton cards (10 out of 11 completed).

The recent ebay prices for modern soccer cards has continued to rise.

The Upper Deck autograph of the Frenchman fetched over $200 bucks even though the signature is on the "band aid" sticker.

This "on card" Gold autograph (1 of 10) from Sport Kings has been hovering around $900 bucks, so someone got a steal at a third of the price. Still one of the best cards ever to have in your collection. 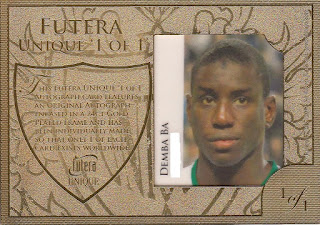 The rise in 1 of 1 Futera autograph cards is truly interesting. Such is the wonder with the above card of Newcastle United's young star Demba Ba.  A 1 of 1 of Liverpool star Maxi Rodriguez also sold for $315.00 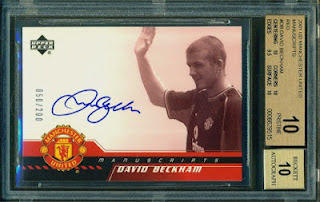 I made the mistake in thinking the auction had ended on this David Beckham card at around $500.00 - it was furious bidding that push it a further $300 bills ...

Next up:  vintage card prices

do you have demba ba? i want to buy him!

yooodelioddeli i have the same david beckham card for sale ?