I've been a fan of Batman since ... well, before it got dark and dreary. I remember when the Caped Crusader wore a colorful costume and the villains were a cheery bunch. But the world has changed.

Its darker and dangerous, and the Bat signal calls for a forceful and perhaps brutal approach to justice.

As much as I like the classic sleek lines of the 1960's Bat mobile, there have been some very cool innovation during the last few decades of Batman films. None are cooler, or more brutal than this ... 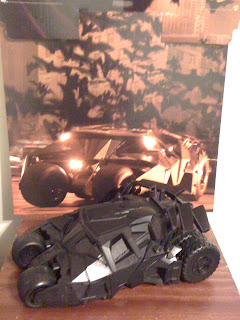 This abomination comes from Batman Begins. It was a military prototype obtained by Bruce Wayne. Its called "THE TUMBLER". It kicks ass in every way, night and day. When I saw this at a rummage sale, I snapped it up faster than the riddler could riddle me.

To see it perform, check out this clip HERE.

I knew exactly where it would be displayed ... 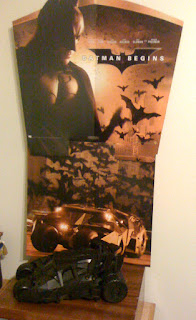 right under my BATMAN BEGINS movie advertising stand up. The vehicle is awesome in that the cockpit opens up to reveal a full aircraft seating with retractable controls. An additional feature are two pop out howitzer guns that eject from the sides. (would be handy in clearing traffic).

Here is the 1982 Panini Roger Milla rookie sticker omitted from my previous post. 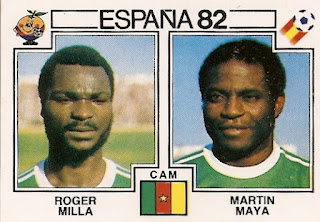