Here's to The Old Guys and A 20-Goal Season

Trivia Time: Who is the oldest player to score a goal in the FIFA World Cup ? 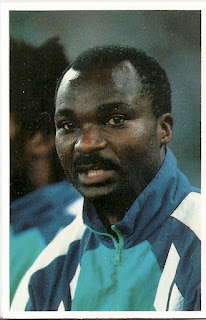 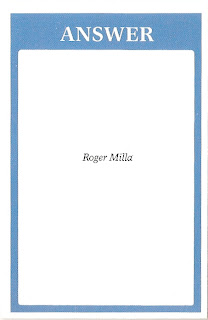 Yes. ROGER MILLA. The 42 year old Cameroon International first appeared for the Lions in the 1982 World Cup.
He also appeared in the 1994 world Cup here in the USA where he set the record for the oldest players to score a goal in the world Cup.

He scored 4 goals in the 1990 Tournament in Italy leading Cameroon to its best finish ever.

His most memorable goal came after stealing the ball from Colombian goalkeeper Rene Higuita and shooting from 35 yards to put his country into the semi-finals. 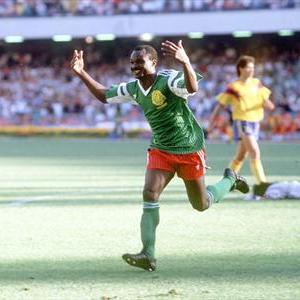 His was one of the first trade-mark celebrations - running to the corner flag and dancing.
Immortalized here in a statue made by the Fanatico Football Figure Co. in the UK. 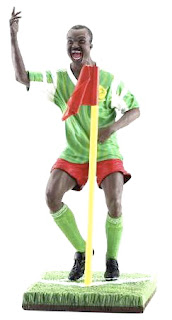 Not only do I own this Limited Edition statue, but I also picked up Milla's rookie in the 1982 Panini World Cup sticker set along with the above Question of Sport card.

Here's to the old guys !

Major League Soccer has not had a 20-goal scorer since 2008 when Landon Donovan got exactly 20.
This season there is a guy on course to reach 20 and ... dare I say it, break the all-time season record ?
The San Jose Earthquakes forward CHRIS WONDOLOWSKI has record an 18-goal and 16-goal seasons in the last two years. This year he already has 17 in 18 games ! 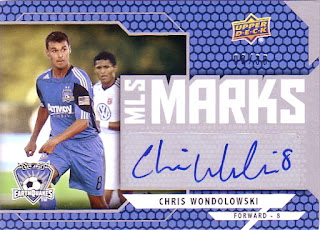 The record is held by ROY LASSITER who score 26 for Tampa Bay in 1996.
Wondolowski only score 7 goals in his first 6 season in MLS. So now, at age 29, he is scoring like there is no tomorrow.
Here's to the older guys !

Do you have a favorite "old guy" ? If so, post me here on the blog. If you are inspired to blog about an old guy, send me a link.