Contrary to some beliefs, a good portion of pre-war cards were not distributed with tobacco or cigarettes. If fact, outside of Britain, most cards were issued as food or candy premiums.
Spain is an example of a region that had a sweet tooth when it came to soccer cards. If candy was the highway, then chocolate was the vehicle.
Playing cards depicting Spanish historic characters were printed as far back as 1896 and inserted into chocolate products. Litografías Industrias Madriguera produced a set aimed at children with suits designed as skittles, balls, swords and sundae dishes around which groups of children are balancing or climbing. Ribbons or blank panels on the reverse incorporated references to the chocolate products.
These were reproduced in 1930 for a soccer set which included some of Spanish Football's greatest names. The back design consisted of a soccer ball with a portrait picture of the player, Rectangle squares above and below the players were either blank or of a advertising of the chocolatier sponsor. 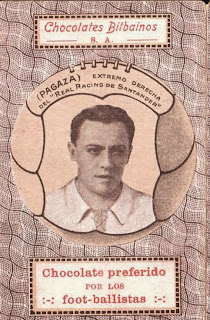 Francisco "Pagaza" Pagazaurtundúa González-Murrieta
Racing Santander
I picked up 4 of these playing cards with the Bilbainos Chocolates advert. The Spanish National Team made their international debut in the 1920 Olympics. Pagaza was part of the starting eleven  which won the Silver medal. 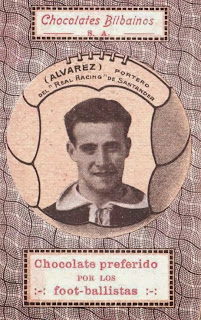 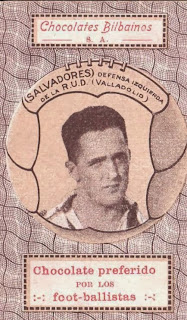 Salvadores - Real Valladolid
One of the most celebrated International players ever, Ricardo  Zamora encompassed the style and flair of early Spanish football. He played for both FC Barcelona  AND Real Madrid. 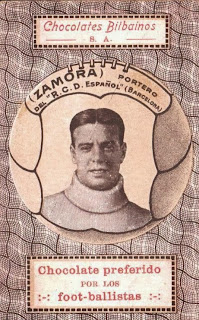 1930 Zamora card shows him with his second tour at Espanol, the club he bagan with and played in between the Barcelona and Madrid.

The playing card fronts of this design 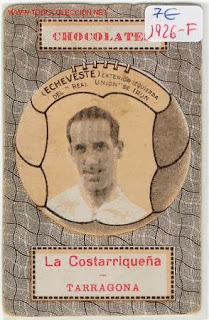 An example (above) of the varied adverts that were featured on these cards. It is thought that these were issued over a period of more than one year. Zamora later appears with a Real Madrid designation on his card.
The card set is known to have come with the following adverts as well as blank box version:
Valencia Chocolates
Xocolates Fin
Choclates Torras
Mont Blanc
Ortiz
SANS
Chiclates Bilbainos

Thank you for this post. I've been trying to find out more about my Isidro Langara which apparently is the blank box version as it exhibits no advertisement. What a beautiful product!