The weekend's garage sale yielded some nice modern sports memorabilia I got from a former journalist.
The first item was from the 1995 BALLPARK BIG CLASSIC PIN SERIES.
It appears that on specific game dates during the 1995 season, attendees could obtain one of 4 Legendary White Sox player pins. From my research I have found that the pins were produced in abundance (enough for everyone at the park).
However, since they were issued, they are difficult to find with the original backing cards which picture the White Sox stars. These were most probably in poor condition and often discarded. 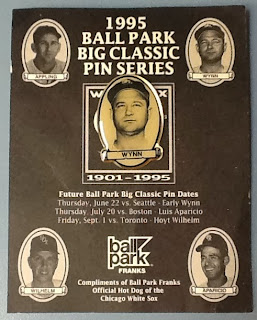 The pins featured Hall of Famers Luke Appling, Early Wynn, Hoyt Wilhelm and Luis Aparicio.
Since we are less than 60 days from the 2014 Winter Olympics, it was fitting that I found these items: 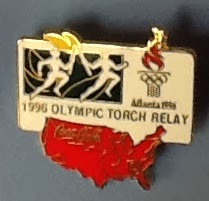 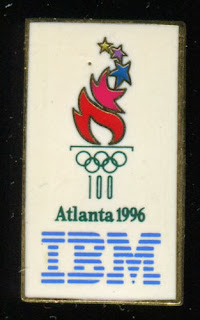 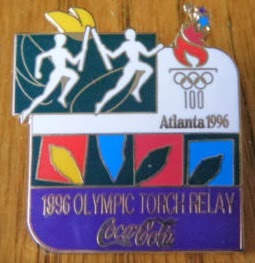 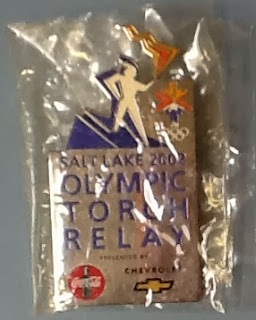 2002 Olympic Torch Relay / Coca-Cola / Chevy Pin
The Winter Games pins seem to be harder to find than Summer Games pins. While most of these are in abundance here in the USA, they are great to trade with people overseas who have been to or live in other Olympic venues. Living in proximity to Disney World, my collection of pins - Disney, Hard Rock Cafe and various sports, has grown quite considerably.

1984 Olympic Sailing Team Button
An unusual but elusive collectors items is the 1984 Sailing Team pinback button (above). While the USA did well in the boating events, I could find nothing about the 3 members listed on the button. I don't figure that there were very many of these produced - perhaps just for members or crew.
Lastly, I purchased this hat from a former news person who covered the 1996 Atlanta Games. It was not available to the general public as were the pins. 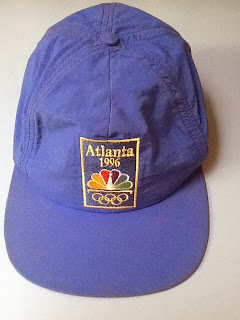 Official 1996 NBC Olympic Games Cap
All these items were from one sale. I will feature some of the other cool stuff next time.