Another group or pre-war cards arrived. These are one of my favorite just for their pure color portraits and white washed backgrounds. The 1934 Carreras tobacco series consisted of 75 cards. I have now accumilated 10 of these.
But not so fast, I say, to completion. This set went through printing changes during its issue. 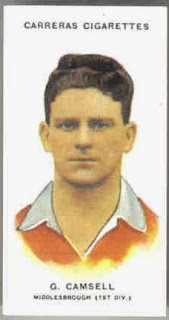 The first printings were release with small lettering, while the 2nd version printing was larger. So in essense, its a true run of 150 cards with variations. The star of this lot is George Camsell, who still holds the best goal to game scoring ratio for England. His 18 goals in 9 matches is a phenominal achievement.
He is joined by three players with over 100 league goals - Crooks, Brook and Cookson. 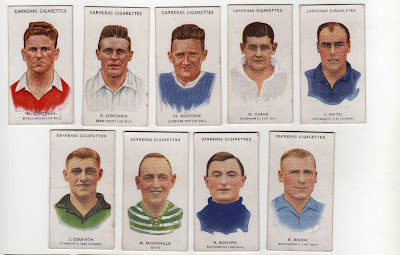 Again, the cards contain a gammet of British Internationals and players from big clubs. These are the players in the group: