With EURO 2012 in the elimination phase of the competition, clubs around the world are jousting for the signatures on contracts for the upcoming season. Last year's Premier League title race went down to the final week of the final match of the final minute where Manchester City nipped cross-town rivals Manchester United on goal difference for the English Premier League Trophy.

Both Manchester teams have a multi-million dollar payrolls of superstars (many playing in this year's Euros tournament).

But over 35 years ago both clubs were stocked with some very good players as well. I've added 7 cards from the TOPPS' debut soccer set to my collection. Topps took over after they purchased the A&BC brand which were the main producers of soccer product from 1958 to 1974.

Here is my Manchester City haul: 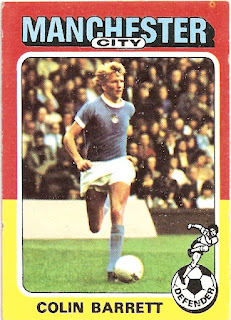 COLIN BARRETT - went on to win the 1979 League Cup with NOTTINGHAM FOREST. 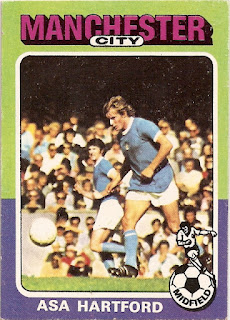 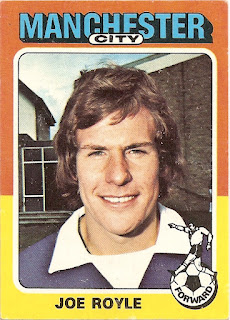 JOE ROYLE - already an Everton legend with over 100 goals, earned 6 caps for England. 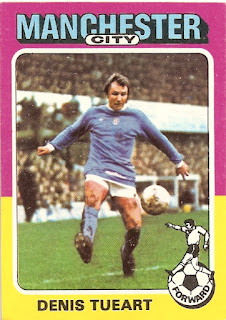 DENIS TUEART - winner of 1973 FA Cup, 1976 League Cup before winning the MVP award while scoring twice for the NEW YORK COSMOS in the 1978 Soccer Bowl. The game was played before 75,000 fans. Won 6 caps for England. 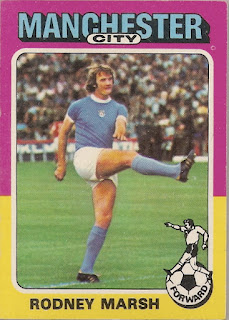 RODNEY MARSH - winner of the 1967 League Cup with Q.P.R. and infamously being dropped from England squad after only 9 caps. He came to America and became a super star with the TAMPA BAY ROWDIES. Who can forget this great MILLER LITE  ad ? 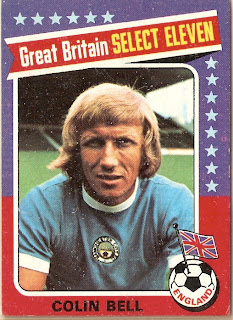 COLIN BELL - winner of 48 caps for England and a legendary City player as seen on this version of TOPPS All-Star card. Came to America for a short stint with the SAN JOSE EARTHQUAKES.
Honored with numerous awards and trophies including the Hall of Fame and made MBE by the Queen. 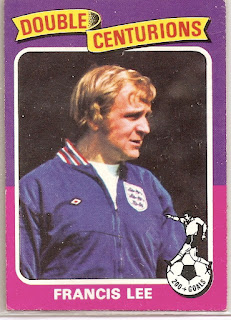 FRANCIS LEE - surprisingly only 27 caps for England but over 200 league goals as denoted on this card. Won league title with Manchester City and Derby County as well as the Uefa Cup in 1970.

I loved this design of cards when they came out for the 1975 baseball set. They are brightly colorful and reminiscent of the 1970's. I love them even more as a soccer card set. They have been very difficult to find in excellent or better condition due to the colored edges.