Most avid collectors around the world probably already know and have samples of the 2012 FUTERA UNIQUE card collection. However, like often is in North America, we get soccer just a bit later. But thanks to our contacts at Futera we received some examples which we can review here.

The high end products are not sold in packs,but rather a box. Each box has at least 1 HEROES card - a subset of 40 players and Limited to 365 copies each. We got 2 African players: 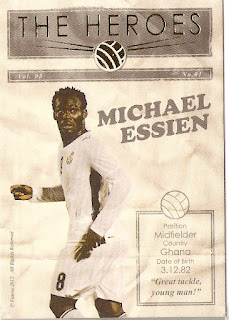 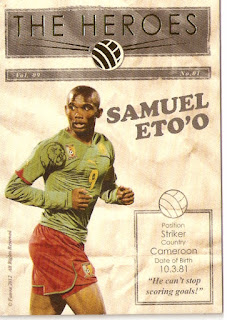 and Cameroon's Samuel Eto'o who now plays in Russia.

The last two groups include retired players (Greats) and up and coming young stars (Next). The base set also comes in a 'Ruby' parallel which are limited to 295 of each players.

Futera continues its memorabilia cards with ARCHIVE set of 24, 16 single swatches and 8 double swatches of jersey cards. Our example was the Sweden and AC Milan strikers ZLATAN IBRAHIMOVIC featuring his a shirt swatch from his Inter Milan days.

These cards are limited to only 225 of each card. 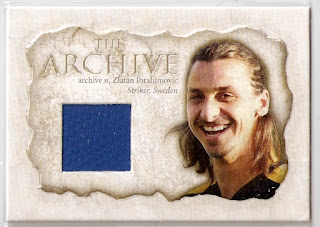 On the successes of their online game which allows collectors to play using the codes on the reverse of the cards, Futera has included a new subset. The MANAGERS is a set of 10 cards limited to just 240 and coated in 24 ct. gold plate.

We were happy to pull the legendary Liverpool man KENNY DALGLISH. 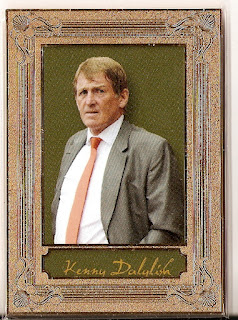 We were not able to get any autograph cards which were distributed in 4 styles - Brown, Mint, Blue and Silver. Each player was able to sign up to 60 cards in each color. However, some only returned as little as 49 from some choices. (For complete list see here)
The next to last most coveted cards are the 1 of 1 autograph cards. For collectors, this is truly the greatest card to own of your favorite player. These regularly command hundreds of dollars on the secondary market. One of the criticisms, however, is the sloppy and illegible signatures on many of the examples.

Another item we did not get to see in person is one of the ten cards known as The MYTHICALS.
These cards, we are told, have 5 encrusted diamonds and are gold plated. Each card is only one of 10 in the world. The list of players: 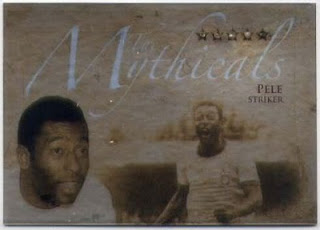 What we like about Futera Unique set:
The photos are pretty nice with these cards. Since the players are pictured with their National sides, there is no worry of a transfer from your team. The base set cards are also great to get autographed.

What we do not like about the Futera Unique set:
The cards are not easily available in the North American market. They are sold on the secondary market on the internet. The worrying aspect is many of the sellers are in Asia - a place know for its counterfeit products.