As I  await for the afternoon hour to kickoff the last quarterfinal of EURO 2012, I rip open another packet of 2012 PANINI Euro stickers.

All this is thanks to our friends over at PANINI AMERICA.

The package arrived on Friday but there was so much going on I waited until I had some sleep before approaching the box. A rather big box, for one to transport such a small box of stickers ! 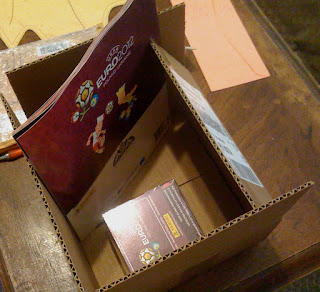 To my surprise, there were 2 albums included in the box (ergo the size of box). Unfortunately, they used rubber bands to roll them up. The box and the album is decorated with the flower motive of Euro 2012 - Poland / Ukraine. 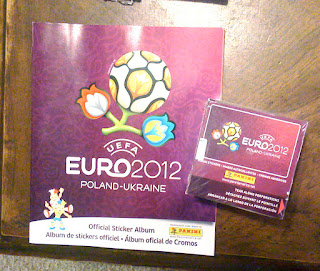 The albums had a starter bonus of 10 stickers so I was already on my way to finishing the set (well, maybe). This issue was different from past years when the stickers were just an uncut sheet of the players. These are spread over a larger sheet where boarders do not touch. In addition to the 8 players, there are 2 stickers that make up Stadium Miejski in Poland. 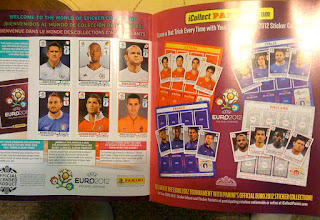 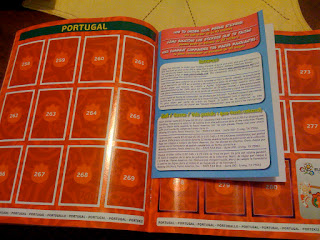 There are several noticeable additions to the albums. The number of players for each squad is greater so that each nation has 20. The bonus is that every country also has 3 star players "in action" stickers. In the past, only the players in the set were listed in the album. For Euro 2012, the complete roster of players from qualifying and recent games are included.

Panini stickers sets have almost always been a portrait style of photos with minimal data on the stickers. Previous issues, like World Cup, had the data inside the album for the players birthdate, height, weight, club and position.

These are are all on the actual sticker for the Euro 2012 set.

Each album has a insert form so that collectors can send away for their missing stickers to complete the set. This has always been a great tradition with Panini. 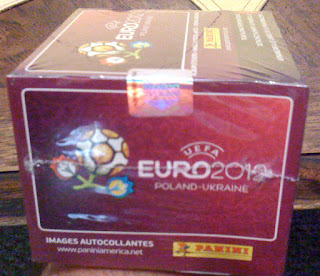 The box comes with a hologram seal and shrink wrap. Not that anyone would tamper with soccer stickers, but if in the future there was a question of authenticity, Panini has it covered. 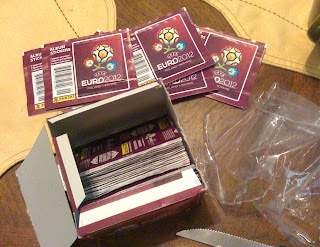 The packets are matching purple and flower theme that runs throughout the product. In contrast to past years, the large bar code is now on the front of the packet rather than the back.

The collation of the stickers is pretty good - I got only 2 duplicates after opening about half the box. The team photos for each country consists of 4 stickers. While the size of the photo becomes a nice viewable size, the stickers are a bit useless if you only get a fraction of the completed group.

After half the box, I had yet to complete a team photo. 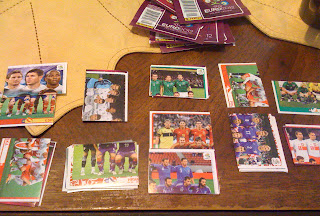 What we like about PANINI Euro 2012:
The portrait photos by Panini make for instant identification of international players. Most depict a good shot of the National Team crest and jersey. The stats on the sticker give a bit more data without having the album at hand. (although the albums used to be like stat books of info)
The increased number of players per squad means that most likely every star that participates is included. However, some players fail like England's Rio Ferdinand and Frank Lampard are in the set but not at the tournament. (Some World Cup sets had supplimental stickers issued which have turned out to be very rare.)
As with past sets, previous competition's highlights were a subset of stickers. The Euros from 1960 to 2008 are pictured on stickers. There are some black and white photos and some memorable moments with these.

What we did not like about PANINI Euro 2012:
The flower theme was used on the team pages with the country names. So having the country name and flowers in cartoon duplicated on stickers was really unnecessary. While I was lucky to get these set to me by mail, I wish they were available at my nearest stores. I don't see any difference following this tournament and watching other American sports on TV.

oh, and in my box, the collation was HORRIBLE. The worst.

sorry to hear about your box selection. you can send for the ones you need for 20 cents each from Panini or find some more traders.

I only have 5 dupes.

I can help you guys out, I've got a friends 6 year old collecting them, I can send packs or dupes!