One Hellas of A Tournament !

One great thing about collecting soccer cards is how much your learn about countries and their cities.
For instance, how many of you knew that the other name for the nation of Greece was HELLAS.

Well if you collect Panini for as long as I have, you would know (or soon find out).

Anyway, this EURO 2012 has been full of surprises and upsets with no less than the co-hosts, Poland, being knocked out the group along with favorites, Russia. This means we get to see at least another round with this goalkeeping legend - 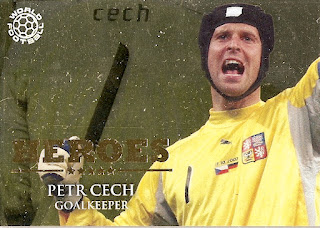 Last week when the tournament began, I opened a pack of 2011Futera I have been saving from last year and this was the hit card I got.  I now have 4 GOLD HEROES cards - Thierry Henry, Lionel Messi and Ronaldinho.

So far the best goalies in the tournament for me have been:
"Gigi" BUFFON - Italy
Stipe PLETIKOSA - Croatia
Petr CECH - Czech Republic
Joe HART - England

It doesn't hurt that I collect both Cech and Buffon vigorously. I may do the same with Joe Hart, but I'm not much of a Manchester City fan.

It is amazing that all the group play has kept the teams close without any one team qualifying after the 2nd match. Tomorrow's "Group of Death" will be played out. Two of the top 10 teams in the world will be eliminated from Euro 2012 - of Germany, Holland, Portugal and Denmark - only 2 will advance to the next round.

So who are your favorite goalies of the tournament ?

to me, it's been an off tournament for Cech and Hart. Hart has not played nearly as good as he can.

But the goalkeeping story of the tourney so far has to be the Poland manager playing 2nd string keeper Tyton in place of starter Wojciech Szczesny against the Czechs in a must win.
Crazy.

Hart has not had a lot to do, but just having him between the posts have kept England alive. As for Tyton, he saved the PK after Szczesny was sent off. On that fact alone, Poland were doomed.

As for Cech, he was everything in the second game. And that's what got them through.