For everyone in North America who has discovered daytime soccer, the next few weeks will be lounging on couches, late breakfasts, and lunches while tracking European soccer stars.

Euro 2012 has kicked off (hosted by Poland and Ukraine) on ESPN with games near midday and 2:45 PM. (check your local listings)

Just like the World Cup 2 years ago, fans can follow the teams and players through the latest PANINI  EURO 2012 issue.
Loaded with the best players in the world, excluding Brazil and Argentina, the top players in Europe are featured with their national teams. 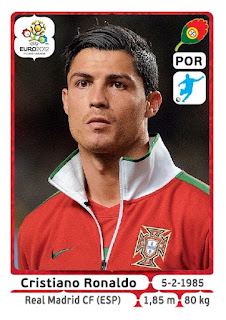 As summers past, Major League Soccer will miss personnel due to the tournament. New York's Roberto Donadoni was absent for Euro 1996 representing Italy. For Euro 2012 Los Angeles Galaxy's Robbie Keane will be Captaining the Republic of Ireland. 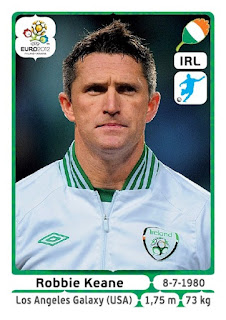 The majority of superstar who feature in the English Premier League, including top scorer Robin van Persie, will be watched closely. 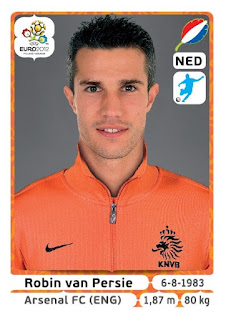 Panini is the biggest and most consistent producer of soccer cards and stickers in the world.
The tradition continues with superb portrait shots of the players in their national team jerseys or in some cases, warm ups. The stickers list the players height, weight, birthdate and club team.
A very compact piece of data for the soccer collector.

Without the large size of Panini's World Cup sets, this collection is half the size of FIFA's biggest tournament and loaded with talented names.

The stickers are made to be pasted into an album which has been available for these sets since 1980. This is a low end product which is great bargain for beginners or young collectors. However, the sticker mania that began in 2010 is popular with adults and has become an office game in some American circles.

I'm not sure if you're just posting about it, or are actually trying to build the set..... I am chasing the set (of course), and have doubles for swapping if you need any.