While Germany is through to the semifinals of the EURO 2012 tournament, I waited for the mail to bring a promised soccer card. FUTERA is probably the highest end soccer cards in the world. Their production of 500 sets to fill the appetite of the entire globe makes their product rare if nothing else.

I was waiting on a replacement card for a returned 1 of 1 autograph. I had small expectations as this could be anyone from the recently sold Lionel Messi or Diego Maradona - both of which sold for over $4,000 on ebay to the lesser known players included in the run.

When my package arrived, I was happy to see a current German international THOMAS MULLER on the card. 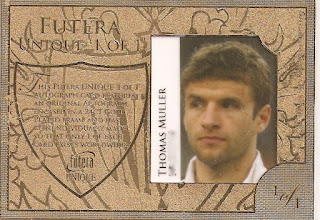 Muller was the Golden Boot inner at the 2010 FIFA World Cup as top goal scorer. He was also voted best young player of the tournament. Playing his club football at BAYERN MUNICH, he has already won 1 Championship and one German Cup title with the Bavarians. 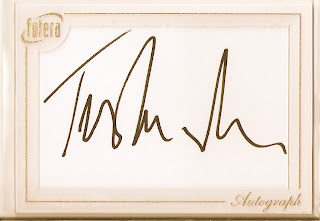 It may not be the most legible autograph, but much better than most of the modern ones I've seen. Having already immortalized himself as top scorer in a FIFA World Cup is great, but he is only 22 years old. Germany finished in 3rd place in 2010 and will end in no less than 4th place with the semifinals yet to be played.

I do not care for the design of the 2012 Futera Unique gold autograph cards. I actually like the ones form earlier years. But as a valued 1 of 1 cards go, this is a pretty sweet one to own.

Did I mention that the card is covered in 24 carat gold ?

WOW very hot card, do you hold them or sell them?

WOW hot card, do you sell them?

Everything has its price. Do you have a web site or email ?

Yes my Mail is subzero3k@gmx.de

Please send me a Mail

Hi Chuck, I am interested in purchasing the Muller. Can you please e-mail me at glenn.allstarcards@gmail.com with a price? Thanks!