One of the great things for this generation who wants to look back at the past - is YouTube clips. As an avid Montreal Canadiens collector it was sheer pleasure when this arrived in the mail: 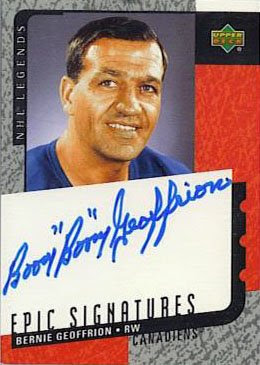 Bernie "Boom Boom" Geoffrion was one the "Habs" great scoring forwards. Had it now been or because of the legendary "Rocket" Richard, Boom Boom could have been even greater. I never saw Geoffrion play. When i first heard about Bernie it was in a beer commercial. Here is another LITE beer commercial with baseball player "Boog" Powell.
The wonderful thing about getting autographs from old timers is that they take the time to make their signature readable. Geoffrion got his nickname from his thundering slap shot - which was known to incapacitate a few goalies in his playing days. He put the lights out on a few ...

Recently, a message board poster sent me some swag in the form of a pair of vintage soccer cards. The 1922 DC Thomson was a massive set of over 1000 cards - and makes baseball's T206 tobacco series seem like a box set. 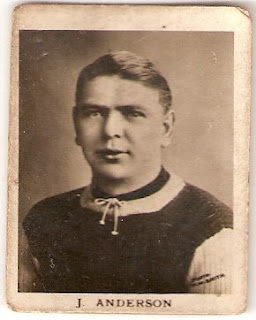 Burnley F.C. player - James Anderson is featured on this sepia miniature photo card wearing a classic tie-front jersey.
The other inclusion was a traditional tobacco cards from the 1935 Carreras cigarettes Famous Footballers series. This adds to my collection of Glasgow Celtics players that stretch over 100 years - pictured is Peter McGonagle. The illustrated card shows a multi-hooped, thin hooped green jersey rather than the thick hoops which became famous later on. 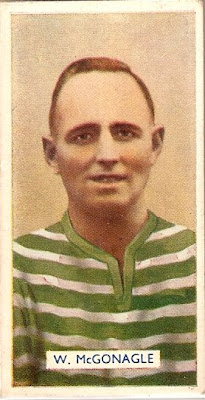