The Montreal Candiens were one of the original clubs to start the National Hockey Association (NHA) - the fore-runner of the NHL. The Renfrew Creamery Kings - a.k.a. the "Millionaires" were a bust after two seasons and from their ashes Didier Pitre (pictured on this C56 from 1910) was the very first player to be signed by the Montreal Canadiens. 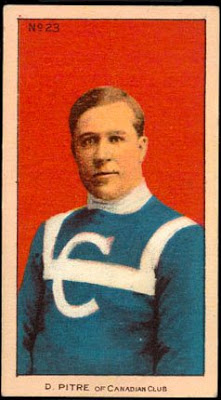 It took about half of a decade but the Canadiens won their first Stanley Cup in 1915-16 season. 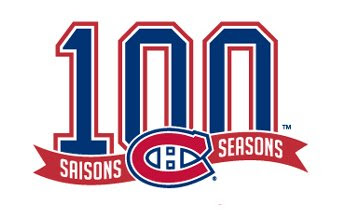 In addition to Pitre, the club boasted 3 other future Hall of Famers - Jack Laviolette and Newsy Lelonde - who alternated as Captains, and the immortalized goalie - George Vezina. The team's only goalie from 1910 to 1926 - Vezina died prematurely from tuberculosis. The club donated the now heralded trophy the following year to goalies who are the best each season. 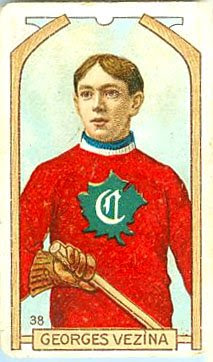 While the Stanley Cup was only won once by the Canadiens during this period, the club could have added a second if not for the influenza epidemic of 1919 which claimed the life of more than a few players. They did finish with the best record in the NHL on several occasions with their stars topping the scoring charts regularly.

NHA ceased to exist and the NHL began play in 1917. League stability and World War I (1914-1918) were great factors that pressured survival of this franchise in its first decade. But the best was yet to come.
Posted by Chuck's Used Cards at 7:17 AM

Cool looking site, lots of old ass cards. It's incredible to think about just how old they are.